Jeremy, a lonely and obese teenager, shoots into the limelight when a headstrong public health nurse persuades him to sue the food industry. Tossed into a storm of media buzz and bullying, the teen draws the attention of a serial killer who's targeting the obese. Soon the boy, the nurse, and their loved ones take center stage in a delusional man's drama.

In this novel of suspense, Eating Bull explores the real-life issues of bullying, fat-shaming, and the food industry's role in obesity. (-synopsis) 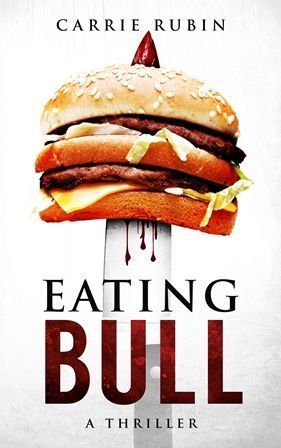 Jeremy is a teenager who is severely overweight.  He lives with his mom and his grandfather in a small house in a not so nice neighborhood.   Jeremy has asthma which acts up whenever he exerts himself or finds himself in a bad situation. Unfortunately the school bully has taken to picking on him so he has found himself in many of these situations.

Darwin is a man with a past.   He used to be overweight but now is fit and toned.  There is a voice in his head that is telling him to kill people or else be punished.  He listens to the voice and makes his first kill only to find he enjoys doing it.  He is targeting obese people and has one particularly person in mind.   He's hoping that he can get to his target before The Voice ends up crushing him.

Jeremy begins going to the health department weight loss center.   Sue is the nurse in charge.   Sue is a strong woman who knows what she wants.  She tries to help everyone but occasionally finds herself in a bad situation due to patients who become irate.   Her latest cases have come into the media spotlight and she's been getting threats at work.

When Sue starts treating Jeremy she knows she's found the person who can help her with the lawsuit she wants to file against the fast food industry.  Jeremy is the perfect poster boy for an obese teenager.  After he and his mother agree to the lawsuit the trio is thrown into the media head first.   Soon everyone at Jeremy's school knows about the lawsuit and kids are talking.  Sue is being harassed at work and the "fat" killer is on a killing spree.

With the lawsuit shine a light on the fast food industry and how they target fat people or will it simply serve to put Jeremy on the killer's list of targets?   Will Sue be safe or will someone be after her?  This book is a thriller that kept me on the edge of my seat.  I was so shocked by who the killer turned out to be!

I found Jeremy to be a likeable character.  While he does well trying to lose weight he ends up sliding back multiple times.  He's realistic as an overweight teenager struggling with his weight and with the kids at school.  I felt bad for him and wished someone would help him.

Darwin is a crazy man who struggled with his weight as a child.  His mother would often lock him in the closet and leave him there for hours on end.   While in the closet he began hearing The Voice.  He truly believes his mission is to rid the world of obese people.

Sue is a crusader of the people.   She is strong willed and does what she can to help people.   Unfortunately her husband and daughter don't agree with her putting herself into danger and they are getting more worried by the minute.   With people spray painting her car and scaring her in the parking garage Sue may not be around much longer.

This is an interpreting book for those who enjoy a thriller.