One of my favorite ways to eat fish is beer battered. I love the flavor of the beer, the spiciness of the seasonings, and the crunchy of the outside of the fish. My version is pan fried rather then deep fried in order to be a bit healthier, though these fish nuggets can be deep fried.

The flour and beer mixed together makes a thick batter for the fish. In Maryland we use Old Bay on just about anything that comes from the sea. It adds a bit of spice to the fish and the salt and pepper round out the seasonings. The nuggets get crispy and golden brown. Don’t cook them too long or the fish will be overcooked and the crust will stick to the pan. 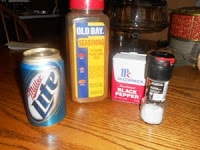 1. Start by cutting each tilapia filet into 8 pieces. Set aside.

2. In a medium size bowl mix the flour, Old Bay, pepper, and salt. Add the beer until the consistency is thick but still pours off a spoon. It will take between ¾ c. and 1 c. of the beer. Stir until smooth. 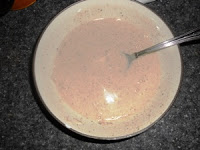 3. Heat 2 T. of oil in a large skillet over medium high heat. Dip half of the fish nuggets into the batter tapping on the side of the dish to remove excess. Place in the pan so that the nuggets are not touching. Cook for 3-4 minutes on each side. The crust should be a golden brown. Remove to a plate and cover.

4. Add the additional 1 T. oil to the pan and fry the remaining half of the fish nuggets. Serve warm with vinegar or tartar sauce. 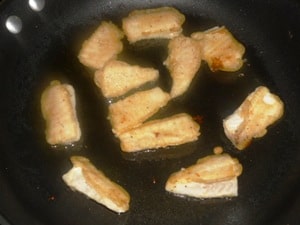 This post linked to:
Made it on Monday, What's Cooking Wednesday
What's on Your Plate? Wednesday, ﻿Real Food Wednesday