Tour Schedule
Sparks the Matchmaker by Russell Elkins
Ollie just wants one thing. The girl.
Things haven’t been going so well with Anne lately, though; their relationship has become a perpetual study date, and Ollie’s roommates are starting to worry about him. How to fix things? Why, with a marriage proposal, of course. 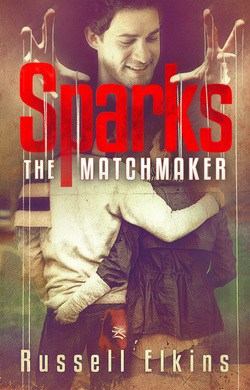 Unfortunately for Ollie, his relationship with Anne has run out of gas. Life feels like it’s counting down to one. And that one is the only person in Ollie’s life he really cares about: Ollie. Perhaps, then, he should get over himself. But first he has to deal with Sparks, the irritating little Yankees fan who invades his life in order to “help” him. And while Keith, his best friend, is doing all he can to help, Ollie’s other friend Richie never fails to show up and threaten to ruin everything just by being himself. Never mind all the drama Sparks brings to the party by forcing Ollie to take a job actually helping people in need.
Will Ollie meet the girl? Will it be in history class? On a road trip to Colorado? Can he get over Anne, or should he try to mend the relationship? Should he pursue the new girl Sparks is trying to set him up with? As the strings of the puppeteer tangle with the strings of the heart, only one person can sort out the mess Ollie has made. It seems that the harder he tries, the more Ollie messes things up. Is Sparks a cruel manipulator, or is he really going to help Ollie find his match?
Amazon * Barnes & Noble

Praise for Sparks the Matchmaker: I wasn't sure what to expect from this book. How many "romance" novels do you read where the protagonist is male, or even where the author is male? At first, I thought that was going to be the unique focus of this story. I was pleasantly surprised, though. The "Sparks" character was a completely unique take on things. Also, I tend to be one of those people who frequently predicts the endings of books and t.v. shows, etc., but I hadn't seen the ending of this story coming. It was a quick and easy read (which was just what I needed right now) but with plenty of intelligence and creativity woven into the story. I think I can say with confidence that even my teenage son would enjoy it, as well as my Mom. Looking forward to the next installment in the series. Definitely not what I expected from a romantic comedy novel, but in a good way! Can't wait for the next one. Author Russell Elkins
Russell Elkins has become a leading expert on open adoption through first-hand experience that he now shares in Open Adoption, Open Heart. Russell regularly contributes to Adoption.com. He also writes his own blog at russellelkins.com to educate others in the struggles and beauties of open adoption.

Russell has always been a family man at heart, looking forward to the day when he could be a husband and a father. It took him a little while, but eventually his eyes locked onto a beautiful blonde, and he has never looked away. Russell and Jammie were married in 2004. They had the same goals for their home and didn't want to wait too long before starting their family. However, filling their home quickly with children wasn't in the cards, and they found themselves weighing their options to overcome problems with infertility. Their lives changed dramatically the day they decided to adopt.

Russell and Jammie have adopted two beautiful children, Ira and Hazel, and have embraced their role as parents through open adoption. Both are actively engaged in the adoption community by communicating through social media, taking part in discussion panels, and writing songs about adoption.

Russell was born on Andrews Air Force Base near Washington, D.C., in the fall of 1977. Along with his five siblings, he and his military family moved around a lot, living in eight different houses by the time he left for college at age 17. Although his family moved away from Fallon, Nevada, just a few months after he moved out, he still considers that little oasis in the desert to be his childhood hometown.

Even after leaving home, Russell always stayed close to his family. He shared an apartment with each of his three brothers at different times during his college career. They formed a band together back in the 1990s and still perform on a regular basis under the name of the Invisible Swordsmen.

After nearly a decade of college and changing his major a few times, Russell received his bachelor's degree in sociology from Brigham Young University in Provo, Utah. He later graduated from Ameritech College where he learned the trade of being a dental lab technician. Russell now owns and operates Elkins Dental Lab located in Meridian, Idaho.

Open only to those who can legally enter, receive and use an Amazon.com Gift Code or Paypal Cash. Winning Entry will be verified prior to prize being awarded. No purchase necessary. You must be 18 or older to enter or have your parent enter for you. The winner will be chosen by rafflecopter and announced here as well as emailed and will have 48 hours to respond or a new winner will be chosen. This giveaway is in no way associated with Facebook, Twitter, Rafflecopter or any other entity unless otherwise specified. The number of eligible entries received determines the odds of winning. Giveaway was organized by Kathy from I Am A Reader, Not A Writer and sponsored by the author. VOID WHERE PROHIBITED BY LAW.