Thomas Block has created "Captain" - his most ambitious, intricate and action-packed aviation tale yet . It is a chilling and all-too-real story about a routine Trans-Atlantic airline flight that suddenly turns absolutely insane. In the doomed airliner's cockpit, inside the passenger cabin and on the ground, a complex array of characters have been propelled at jet speed into a sudden and frantic race for survival.

"Captain" is about the individual and collective struggles of each of these men and women as they attempt to deal with and ultimately fight against the odds and circumstances that are stacked against them.

"Captain" is a novel that pits man against man while also pitting man against machine. It is a story about the need for human judgments, hard-learned experiences, gut feelings and unbridled perseverance in an effort to rise up against a world where the strict adherence to written rules, regulations and procedures have been accepted as the norm.

"Captain" is about the way real airline pilots think, feel and react, especially after those giant airliners that they've strapped themselves to have suddenly turned vicious and unpredictable.  (-synopsis from Goodreads.)

When I started the book I wasn't sure whether or not I was going to like it because it talked a lot about the characters and their backgrounds in the airline industry.  The action starts when the captain and crew of Flight-3 begin to feel tremors in the plane that lead to trouble.  The book explores how much we now rely on technology and what happens when that technology fails.

There are a lot of characters in the story but they are well developed and many of them are intertwined in throughout the book.  The book also jumps back and forth between what is happening on the air and what is happening on the ground but the author does it in such a seamless way that there was no difficulty following what was happening.  It builds the suspense twice as much and I never knew what was going to happen until the very end.

This book is great for suspense and thriller lovers.  It's a fast paced novel that will keep on the edge of your seat and biting your nails. 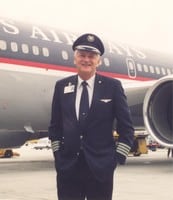 Thomas Block has written a number of aviation-oriented novels, many which have gone on to acquire best-seller status in numerous countries. His novel writing began with the publication of “Mayday” in 1979. That novel was rewritten with novelist Nelson DeMille in 1998 and remains on DeMille’s extensive backlist. “Mayday” became a CBS Movie of the Week in October, 2005.
Several of the other novels by Block include “Orbit” (a top bestseller in Germany, among other nations), “Airship Nine”, “Forced Landing” (also done as a radio serialization drama in Japan), “Skyfall”, “Open Skies” and his latest novel, “Captain”. Thomas Block is still writing both fiction and non-fiction, and has edited and updated his earlier novels into ebooks in all the major formats and also into handsome full-sized (6″ by 9″ Trade Paperback) printed versions.
Block’s magazine writing began in 1968 and over the next five decades his work has appeared in numerous publications. He worked 20 years at FLYING Magazine as Contributing Editor, and as Contributing Editor to Plane & Pilot Magazine for 11 years. Block became Editor-at-Large for Piper Flyer Magazine and Cessna Flyer Magazine in 2001. During his long career as an aviation writer he has written on a wide array of subjects that range from involvement with government officials to evaluation reports on most everything that flies.
An airline pilot for US Airways for over 36 years before his retirement in April, 2000, Captain Thomas Block has been a pilot since 1959. Since 2002, he has lived on a ranch in Florida with his wife Sharon where they board, compete and train horses.
His latest book is the suspense/thriller novel, Captain.