Jill Gardner—owner of Coffee, Books, and More in the tucked-away town of South Cove, California—is not particularly thrilled to be portraying a twenties flapper for the dinner theater murder mystery. Though it is for charity…

Of course everyone is expecting a “dead” body at the dress rehearsal…but this one isn’t acting! It turns out the main suspect is the late actor’s conniving girlfriend Sherry…who also happens to be the ex-wife of Jill’s main squeeze. Sherry is definitely a master manipulator…but is she a killer? Jill may discover the truth only when the curtain comes up on the final act…and by then, it may be far too late.  (-synopsis) 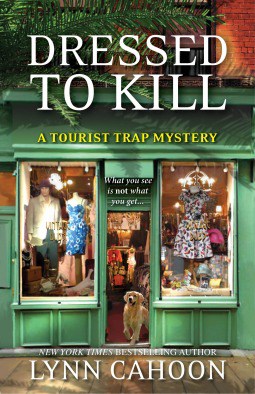 Jill is the owner of the local book and coffee shop.   Things seem to be going well for her.   She's dating a super hot man, her coffee and book shop is doing well, and she lives in a great house.   The only thing that is stopping her from being blissfully happy is Sherry...the ex-wife of her boyfriend.

Just being in the same town is bad enough but when Sherry hosts a business meeting for everyone in the town it's more party then meeting with champagne, food, and even massages.   Everyone is thrilled except Jill.   She's even less thrilled when Greg, her boyfriend, shows up to speak at the request of Sherry.

Putting her feelings for Sherry aside, Jill and Greg go to the local theater for a dress rehearsal for a murder mystery.   Everyone is having a good time getting into costume, tasting the new beer, and drinking some wine.   Things are starting to look up when a dead body shows up...and it isn't part of the show.

The dead man is Sherry's new boyfriend.  A security tape shows that Sherry came into the building and left in a hurry.  Suddenly Greg is investigating his ex-wife as the number one suspect.

This is a great cozy mystery with a cast of characters that are entwined in one way or another.   It's an easy, light read, and keeps you guessing until the end.   Like most cozy novels, this one has a recurring cast of characters from book to book so once you get into the series it's easy and fun to pick up another book and continue with the characters in a new mystery.