Benny, fifteen, is solitary by circumstance more than choice: he counts each move to a new town as "a life." He's on Life Number Seven. His last! He plans to run away from his paranoid mother, who's been on the run since the disappearance of his father when he was three. Benny has no memory of it, except for weird dreams of a firestorm and a hideous red-eyed dragon. After a fight with his mother, Benny packs his bags. Boom! The house explodes, catapulting Benny into a world he never imagined existed. The trail leads him to a gated Neoclassical building in the woods and to six teens he vaguely remembers: Kami is deaf, Amir is blind, Zuma is overweight, Layla is gorgeous but lazy, Chaz is in a wheelchair and Raj is as angry as the purple dagger-shaped birthmark running down the side of her face. These unlikely heroes share a common thread: Benny lost his father and they lost their mothers on the same day. The only clue to the mystery is Benny's grandfather, Domenico H. Adez, a mysterious and dangerous man.(-synopsis) 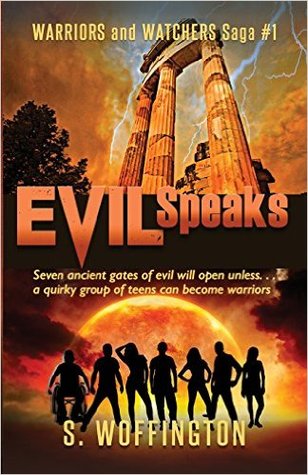 This book starts out with Benny being at school.   It's his seventh or eighth school because every time they move they can only stay for so long before his mom makes them leave.  They've been on the run since his father died when he was 3.  Benny doesn't know who they are on the run from or why but he's tired of it and determined to leave his mother and set out on his own.

The only problem is that other people have different ideas.  On the day he is planning to leave a bomb explodes in his house.   Benny wakes up in the hospital to find a man named Mike who knows all about him and is there to take care of him.  He presumes his mother died in the blast.

Soon Benny and Mike arrive at a rural place where Benny's mom told Mike to take him if anything ever happened.  Upon arrival Benny realizes he used to live here.   He meets six other teens his own each, each with some type of disability or problem.  The thing that links all seven of the teens together is that on the day Benny's dad died they all lost their mothers.   They are now in this compound led by Minnie.  Minnie is actually there to help train them for the day when they will need to save the world.  It turns out that day is sooner then later.

The teens soon meet Hades and the other gods of the underworld.  They realize it is their mission to stop them from opening the gates from the Underworld so the creatures that go bump in the night won't get out.  The teens train their minds and bodies for an adventure they won't soon forget.  The main problem is that they need to learn to work together and to overcome their disabilities and problems in life.

Can the teens work together to save the world?   Will they find out what happened to their parents?   Or will they be stuck in the Underworld forever?

As a special education teacher I love the fact that this group of teenagers are unlikely heroes that need to overcome their disabilities and other problems to work together to save the world.  It's nice to see that the heroes don't have to be the tough athletes all the time.

I had a hard time getting in to the first chapter of the book.  I felt like I entered in the middle of the story and was very confused.  In fact, I read about 10 pages and then put the book down for a week because I wasn't in to it.   However, I picked it up a week later and powered through the first two chapters.  After I got through the first two chapters I got a feel for the characters that I needed to know and started getting in to the story.

Once Benny got to the remote area with Minnie and the other kids I really started enjoying the book.  I liked finding out about the kids backgrounds, how they interacted with each other, what their strengths were, and what their weaknesses were.  Plus the more in depth the kids got into their quest the more they worked together and the more I learned about them.

I think this is a great book for any young adult or child that likes adventure novels.   The twist with the unlikely heroes is just a bonus on top of a great story!   Kids will want to keep on reading this one until the end!