Months after absorbing a nuclear explosion, Jason Champion is recuperating in a hospital when he is attacked by a shape-shifter with an agenda. She wants to harvest Jason’s radioactive blood to keep his enemy, David King, alive. King had almost died at Jason’s hands, but he now wants revenge.

Following a narrow escape, Jason is joined by his new girlfriend Rhapsody, his ex Sasha, and a new friend, Esteban. While the provenance emerald, scarlet emerald, goshenite, heliodor, and morganite crystals that grant them mysterious powers are safe, there is a new threat.

The most sought after version, aquamarine, has been found. Its wearer can raise the dead.

Now in possession of the aquamarine, Jason is faced with decisions: deliver it to King in 72 hours or let everyone he cares about pay the price. He and his friends race across the nation to do the impossible: keep those close to him safe while defending the aquamarine before time runs out.

The action continues in the third installment of the Reject High series, continuing the tale of the layered teenage characters and their charge to defend the planet.(-synopsis) 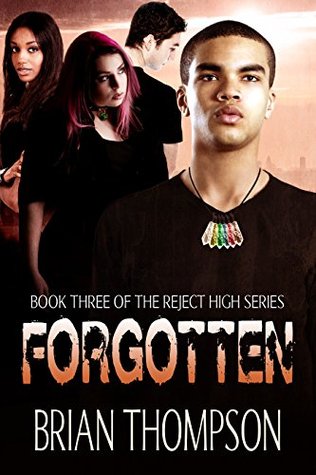 All my favorite characters from Reject High are back in this third book in the series.  This time Jason is in a race to find Debra, his stepmother.   King has captured her and is luring him into coming for her so he can take Jason's blood.  It turns out there is something special about Jason's blood and King wants it.

Before he can get there he has to make a plan.  The plan involves his girlfriend Rhapsody, his ex-girlfriend Sasha, and their new friend Esteban.  They also have the help of some of The Collective.   The only problem with that is that they aren't sure how much The Collective is truly helping them and how much they are hiding from them.

Along the way Jason finds he has some new powers to use.  He hopes these are enough to beat King and get Debra back.  He also learns that he possesses a gem that could bring his mother back from the dead.  He now has to decide which is more important and if he has the strength to do both.

Jason and his friends go through a lot of battles and tests before they finally come face to face with King and his minions.   Will they all get out of this alive or will there be casualties on their side?   Is Jason's luck about to run out?  Find out what happens in this thrilling third edition of the series.

Jason is again the hero in this book.  He has the strength and speed to defeat his enemies if he can keep the black outs and rage in check.  He has a lot of emotions going on, especially when he is forced to choose between Sasha and Rhapsody once and for all.

The rest of the teenagers are smart, have their own abilities, and are willing to back Jason wherever he leads them.   Together they are stronger then they are apart.   I really like seeing the dynamic between the characters in the book.

I found this book to be fun and easy to read.  I wanted to find out how Jason was going to save the world...again.  I also wanted to see if all the characters would survive and all I will say is that not everyone does.

If you enjoyed the first two books in this series you will certainly enjoy the third as well.  This is a great series for young adults and anyone that has ever felt like a reject because those are the people that end up being the heroes.