Proprietor of the Eternal Slumber Funeral Home, Emma Lee can see, hear, and talk to ghosts of murdered folks. And when her high school nemesis is found dead, Jade Lee Peel is the same old mean girl—trying to come between Emma Lee and her hot boyfriend, Sheriff Jack Henry Ross, all over again.

There’s only one way for Emma Lee to be free of the trash-talking ghost—solve the murder so the former prom queen can cross over.

But the last thing Jade Lee wants is to leave the town where she had her glory days. And the more Emma Lee investigates on her own, the more complicated Miss Popularity turns out to be. Now Emma Lee will have to work extra closely with her hunky lawman to get to the twisty truth.  (-synopsis) 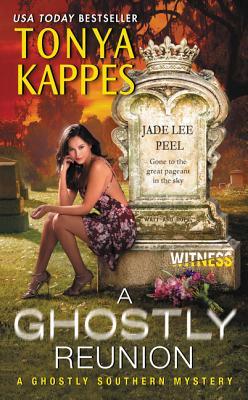 Emma Lee not only owns a funeral home but she can see ghosts.   This is something that happens everyday but it's happened enough that people in her town think she's a little off.  However, Emma Lee doesn't have time for talking to ghosts with her high school reunion coming up.

Everything is ready to go when Jade Lee blows into town.  Jade Lee and Emma Lee never got along in high school.  In fact, Jade Lee dated Jack Henry in high school who is now Emma Lee's current boyfriend.  Jade Lee is also a reality show star and the biggest celebrity in the tiny town of Sleepy Hollow.   She's also Emma Lee's biggest enemy.

Her feelings certainly don't change when Emma Lee sees Jade Lee hanging all over Jack Henry.   Her jealously flares up and she can't wait for Jade Lee to leave.  However, Jade Lee is making her new reality show in town and she's determined to make her hometown look like Hickville.

Jade Lee has her clique with her and she wants everyone else out of her way.   When the reunion festivities kick off Jade decides to do a quick interview before going to the bar.   It starts out ok but then Jade Lee ends up dead.  This ruins Emma Lee's night since Jack Henry is a policeman and he has to leave.

Things get worse when she gets home and hears the voice of Jade Lee.  Apparently Jade has been murdered and her ghost has decided to stick around.  Since only Emma Lee can hear her she buddies up to her unlike she did in life.  Emma Lee decides she needs to find out who murdered Jade and fast!   She can't take having the celebrity around her 24/7.

Will Emma Lee and Jack Henry be able to solve the murder or will Jade Lee be around for good?  Who had it in for Jade Lee?  Or more likely who didn't have it in for her?

Sleepy Hollow isn't so sleepy anymore.   Follow along with Emma Lee and Jack Henry on their adventures to find the murderer.

I found this book easy to read.   The characters were easy to learn and I instantly liked Emma Lee even though she's a bit of an odd ball.  It was hard not to hate Jade Lee and her snooty ways almost immediately.

I liked read about the clues in the book and trying to figure out who the murderer was.  There were so many people that didn't like Jade Lee that I had to knock them off my list one by one.   But in the end this was an easy and fun cozy mystery.