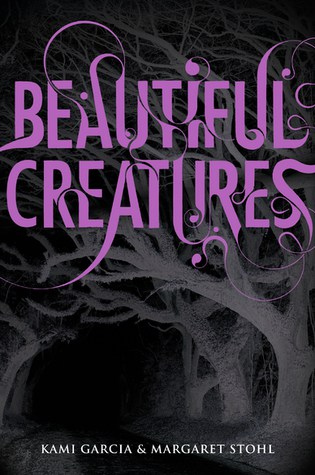 "There were no surprises in Gatlin County. We were pretty much the epicenter of the middle of nowhere. At least, that's what I thought. Turns out, I couldn't have been more wrong. There was a curse. There was a girl. And in the end, there was a grave. Lena Duchannes is unlike anyone the small Southeren town of Gatlin has ever seen, and she's struggling to conceal her power and a curse that has haunted her family for generations. But even within the overgrown gardens, murky swamps and crumbling graveyards of the forgotten South, a secret cannot stay hidden forever. Ethan Wate, who has been counting the months until he can escape from Gatlin, is haunted by dreams of a beautiful girl he has never met. When Lena moves into the town's oldest and most infamous plantation, Ethan is inexplicably drawn to her and determined to uncover the connection between them. In a town with no surprises, one secret could change everything.

First I should start off by mentioning that this book was made into a movie in 2013, and I happened to see the movie first. Secondly, I should mention that I'm usually a big advocate for "The book is ALWAYS better than the movie." Note that I said USUALLY, sometimes Hollywood gets it right and the movie is just as good (rarely is it better though) as the book. Beautiful Creatures is one of those times that the book and the movie were equals. Reading Beautiful Creatures after seeing the movie was like visiting a town that's looks like yours, has people with the same name, but there are enough differences that you can tell they're not the same town but those differences are what makes each city unique. There were several spots in the book where things were DRASTICALLY different from the movie, specifically the ending, but even though they were different they were neither better nor worse than the movie...they were their own if that makes sense. Now that I've told you about the differences between the book and the movie lets discuss what I thought of the book. Beautiful Creatures is a BIG book and some people could probably read it and tell you a bunch of things that could have been cut-out to make it smaller and still flow, however, in my opinion I felt that everything flowed wonderfully. The characters were well developed, I liked the characters I was supposed to like and disliked the ones I was supposed to dislike, and was drawn into the story from the beginning. I found this book hard to put down and immediately started the next book in the series.

5 out of 5 To read more book or makeup reviews that I've done visit my blog, Southeast by Midwest. Thanks again for letting me share Heather!