KIDNAP: Book 1 of Guy Erma and the Son of Empire

An Action Adventure set a long time ago on a planet far far away...

The new serialisation of Guy Erma and the Son of Empire!

"Guy Erma and the Son of Empire by Sally Ann Melia is a fast-paced and exciting YA military sci-fi read. Don't miss this one!" — Brent LeVasseur, author and illustrator of the Aoléon The Martian Girl series.

I don’t want to go… Do I have to go?
13-year-old Prince Teodor of Freyne knows his duty to the memory of his father and his kingdom. Always, he must help those less fortunate than himself. Yet a frightening nightmare fills him with foreboding, but still he must do - into the Dome.
13-year-old Guy Erma lives in the shadow of the Dome, he has no father and no mother and his future is uncertain, he must start earning a living when he turns 14. He knows not where he will live or even how he will eat, and his only dream is to enter the military academy - at the heart of the Dome.
Two boys as different as any two boys might be. One act of cruelty will throw their lives together, but who dare they trust? (-synopsis) 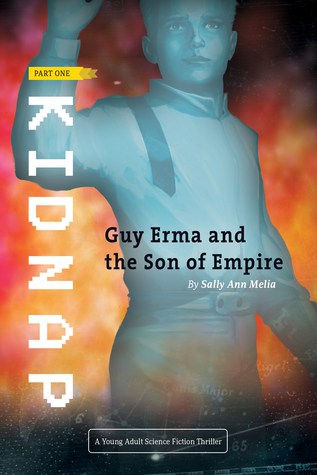 In the prologue we meet Captain Karl Valvanchi, from the Zaracon Democratic Union.   We don't know much about him except that he is defending  Sas Daron, where scientists are learning about deadly cybernetic insects, or cy-sects.   We also learn about his niece, Nell, who goes to the palace and meets Prince Teodor.

Prince Teodor of Freyne knows that he will one day be the king.   His father died years ago and his grandfather is the Emperor.    He must live up to the expectations set forth for him even though he secretly has nightmares every night.  He is training with the Dome Elite but yet they won't let him fight the fights he wants.  His mother is overprotective and just wants to keep him safe.

Guy Erma lives at the House of Jewel, the oldest and most respected fashion house on the planet.  Even though his good looks could earn him a job in the fashion world, he wants to be one of the Dome Elite.   His scores in math are high and he is the blades champion for his year.  The only problem is he isn't register, there is no mom or dad to claim him and the Dome Elite are only looking for those registered to join them.

The boys don't know much about each other but are thrown into a situation when the Dome Cyborgs attack a performance and kidnap the Prince.  Who are the Cyborgs working for and what do they want with the prince?  There are so many different players involved and each wants something else. The Dome Elite must find Teo before a new election is held that puts the planet i

This story takes place in a galaxy far away on another planet.  There are a lot of sci-fi elements to the book.  I like that there are illustrations throughout the book of the characters.  It made it easier to visualize them in my head during the story.
I found that I liked that one of the heroes was from the upper class and the other was an orphan.  There were so many differences between the boys yet when it comes to fighting for their planet, they can learn to work together for the sake of the Dome.
The only thing I did not like about this book is that it was hard to get into.  There were a lot of character and planet names and I had difficulty keeping them straight.  However, once I got into the book it was easy to remember the characters and the planets and I enjoyed the story.  I'm looking forward to the second book in the trilogy.
I give this book 3 ½ out of 5 stars.