Oh my darling brother Jason.  He loves to eat and he loves to eat well.  While he is able to cook, he much prefers someone else to do the cooking for him.  Generally if it's something time consuming that person is me.  He is 31 years old and can still whine with the best of them until he gets me to cave and make him whatever craziness it is he has requested. 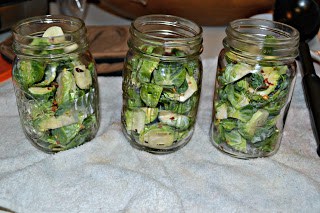 This year when I asked him what he wanted for his 31st birthday his answer was "Pickled Brussels Sprouts."  Um yeah.  I don't even eat Brussels Sprouts so I tried to get him to pick something else but in the end this is what I made him.  I looked around for a recipe for canning Brussels Sprouts but there really aren't any from any of the big canning authorities.  So I went with a pickled Brussels Sprouts recipe and then sealed them in using a canning method, but still making them pickled.

They looked great in the jars and really weren't hard to make.  I was very concerned how they were going to taste since I couldn't try any because I don't like them.  When my brother tried them he was pleasantly surprised and really enjoyed them although he did say they could be spicier.  Typical brother.

1.  Wash the Brussels Sprouts and set aside.

2.  Prepare a boiling water canner and 3 pint jars and lids.

3.  In a large pot combine the vinegar, water, sugar, onion, red pepper, celery seed, and peppercorns.  Bring to a boil and boil for 5 minutes.

4.  Meanwhile, divide the Brussels Sprouts between the 3 pints jars.  Place 2 halves of a garlic clove in each jar.

5.  Fill each jar with the vinegar solution leaving ½ inch of headspace at the top.  Sprinkle with the red pepper flakes and pickling salt.

6.  Place a lid on each jar and tighten the screwband to fingertip tight.  Put into the boiling water canner and boil with the lid on for 10 minutes.  Remove from heat and allow to sit for 5 minutes.

7.  Remove from the pot and allow to cool for 24 hours.  Check to make sure the jars sealed.  Let the jars sit for at least 2 weeks before opening to get the best flavor. 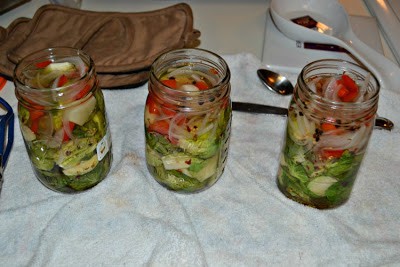