Mr. Breeze is back; so is Michael Ryan and Rover, the magical dog.

MR. BREEZE fans can rejoice. REVELATION, Morrie Richfield’s much-anticipated sequel to his novel MR. BREEZE, has arrived. Readers new to the strange but inspiring tale of a super being and his attempt to set mankind on a straight and moral path for its very survival can immerse themselves in what critics and readers alike are calling an “inspirational fantasy” with important lessons for all of us.

In MR. BREEZE, published in 2011, Richfield introduced readers to Zackary, aka Zack, aka Mr. Breeze, an ancient being who claimed to be mankind’s creator and who still exerts a powerful force on the human race and its very existence. Zack appeared on earth as a powerful man who did miraculous deeds. He chose journalist Michael Ryan to tell his story in a book that, he hoped, would show mankind how to stop its self-destructive ways and bring paradise on earth. With man’s fate hanging in the balance, Zack disappeared, leaving humans to their fate and Michael wondering what his role really is. 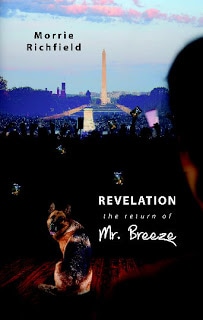 REVELATION moves the action two years into the future. The situation looks bleak. Mankind has slipped back into its old, destructive ways and Michael has become a dissolute recluse. There are people who view Michael as a savior and others who see him as a threat to be eliminated.
Along this strange trip, Michael meets new friends and reunites with old companions, the most significant of which is Rover, an abused dog whom Zack endowed with superpowers. Rover becomes Zack’s messenger to Michael, as Michael tries to get Zack’s original message out to the world:  If mankind doesn’t straighten out, he will destroy the human race.

Richfield plays down the description of REVELATION as an “inspirational fantasy.” He calls it a “self-help book, a textbook, a reality series on paper. It is what we see when we look in the mirror.”
If MR. BREEZE focused on Zack and his message, REVELATIONfocuses on Michael, following his struggle to understand his role in Zack’s master plan and to find his soul, Richfield says. “Michael’s final revelation is that we just don’t learn. Without the threat of destruction, we go back to our old ways. Our time is almost up and we need to do something. We need to show Mr. Breeze the human race deserves a chance to continue to exist.”

View the trailer for the book: