This month the What's Baking? challenge was hosted by Jey of The Jey of Baking.  She challenged us to do some savory baking.  I knew immediately that I was going to make rosemary focaccia.  Focaccia is on my list of 31 while 31 and my cousin Jessie gave me a recipe for the rosemary focaccia a few months back. 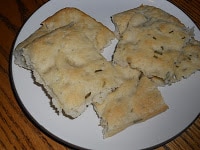 The focaccia was fairly easy to make.  I still had a few sprigs of rosemary growing in my herbs garden so I used that in the focaccia and on top of it.  Focaccia doesn't have much kneading which makes it easier then many other yeast breads.  It's also spread on a pan and baked instead of in a loaf pan.  The focaccia turned a golden brown and was nice and thin.  It was crisp on the edges and was tasty without anything on it.  It also made a flavorful sandwich bread. 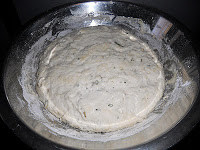 2.  In another bowl mix the flour, salt, fresh rosemary, and dried rosemary.  Mix the yeast mixture into the flour mixture.  Stir for 2 minutes or until the dough is just combined and smooth.

3.  Put in a bowl and cover.  Let the dough sit for 2 hours or until it doubles in size. 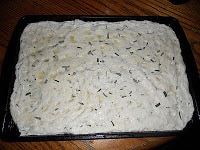 4.  Oil a quarter sheet pan and scrape the dough onto it without folding it.  Oil your hands and spread the dough to the edge of the pan.  Dock the dough at 1 inch intervals.  Brush the top with oil and sprinkle with salt and fresh rosemary.

5.  Cover with plastic wrap and let rise 2 hours or until almost doubled.

6.  Preheat the oven to 450 degrees.  Cook the focaccia for 20 minutes or until the top in golden brown. 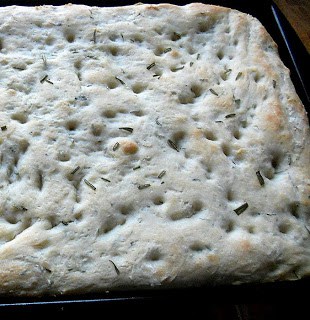