I love using my crock-pot on aerobics nights.  It just makes life easier.  The only complaint I have about cooking in the crock-pot is that there is no crunch to anything.  Part of the reason I couldn't wait to make this Cuban Pork is because in addition to the shredded pork, there is a crunchy slaw that goes on top to give it more texture.  There's also a chipotle cream to spice things up. 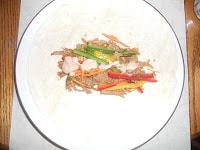 The pork smelled wonderful when it was cooking.  The rub that goes onto the pork is a combination of smokey, spicy, and sweet.  Then the pork is flavored by sweet orange juice and sour lime juice along with garlic and onions.  It makes for a sweet and smokey pork.  The pepper slaw adds a much needed crunch and the chipotle cream is both spicy and cool.  The entire combination is wrapped up in a tortilla and it's delicious.  There was also plenty left over for lunch the next day which is always a plus. 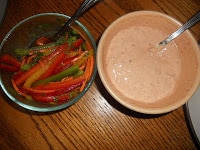 1.  Rub the pork roast all over with the mustard and oil.

2.  In a small bowl combine the cayenne, allspice, garlic powder, cumin, salt, pepper, paprika, and oregano.  Mix well and rub all over the pork roast.  Wrap in plastic and refrigerate overnight.

3.  In the morning heat 1 tablespoon of olive oil in a large skillet over medium high heat.  Place the pork roast in the skillet and brown on all sides.  Remove to the slow cooker. 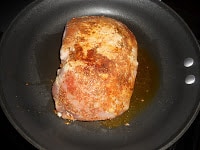 4.  Place the onions and garlic on top of the pork.  Combine the honey, orange juice, lime juice, and chicken broth.  Pour the mixture into the slow cooker.  Cover and cook on low for 8 hours.  Shred the pork and allow to cook for 15 additional minutes.

5.  Meanwhile, combine all the ingredients for the pepper slaw in a bowl.  Refrigerate until ready to serve. 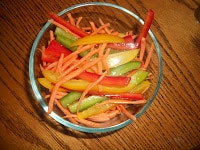 6.  To make the chipotle cream, combine all ingredients in a food processor.  Mix well until combined.

7.  To serve place a large spoonful of pork in a tortilla.  Place the pepper slaw on top of the pork then top with chipotle cream. 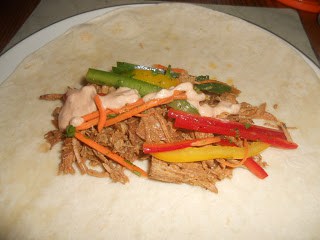