Klara Walldeen, orphaned as a child and brought up by her grandparents on a remote Swedish archipelago, is now a political aide in Brussels. And she has just seen something she shouldn’t: something people will kill to keep hidden.

On the other side of the world, an old spy hides from his past. Once, he was a man of action: so dedicated to the cause that he abandoned his baby daughter to keep his cover. Now the only thing he lives for is swimming in the local pool.

Then, on Christmas eve, Klara is thrown into a terrifying chase through Europe. Only the Swimmer can save her. But time is running out...(-synopsis) 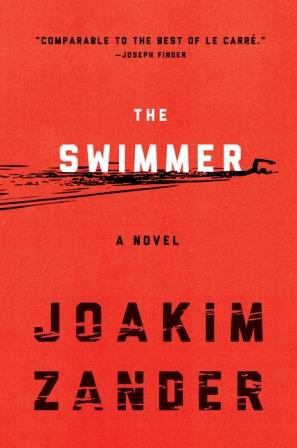 The book opens in 1980.   A man and a woman are hiding in an apartment with a sick baby.  The woman goes out to get medicine for the baby and her car explodes killing her instantly.   The man runs, leaving the baby on the steps of the embassy, never to see her again.

Fast forward to 2013.  Klara works as an EU Parliament aide.   She enjoys her work and she enjoys the fling she is having with a man.  However, she missed Moody, a man she was with for a few years.  She hasn't spoken to him in 3 years but receives a message that he is coming to Brussels.   She doesn't know whether she wants to see him or not.

Mahmoud goes through life looking over his shoulder.   He is in Brussels for a conference where he is speaking.  He hears from an old friend and when he finds him the friend is assassinated and now Mahmoud is on the run and wanted for his murder.   His training from his past is all he has to get through the craziness in Brussels.

George is a lobbyist.   He is on top of the world and loving his position.   He is on the fast track to becoming a big wig at his firm when he gets a call from Digital Solutions.  It sounds reasonable enough until he learns they are holding something over his head.  Something that would cause him to lose his job and he has to do whatever they ask him to and that includes breaking into offices, spying on people, and translating illegal documents.

Then there is a spy in Virginia who feels lost in life.   We learn about his life through the past and we see flashbacks of his life.   The daughter he lost, the wife he left, the job that no longer held meaning.   When he hears that something has happened to Klara he knows he is the only one who can save her.

These four characters are each working in their own time and space but soon they will have everything to do with each other.  Who will end up living and who will die?   Will any of them come out unscathed?

This was an interesting novel that really showed me a look into the lives of these four characters.   At times their paths crossed but they were each living separate lives....until they weren't.   This is a fast paced novel that bounces between the present and the past so the reader can learn about where the characters came from and where they are going now.

It was an enjoyable read and the characters were well developed.  I cared about them all in a different way and wanted each of them to get what they wanted in life.