Failed surgeon, David McBride, is in exile from the surgical community after making a costly error in judgment. Down, but not out, he perseveres and is given a second chance to establish a career in surgery. But, as McBride stands on the threshold of a new life, the malignant underside of his fellow man intervenes. Under the threat of violence, David is forced to perform illegal organ harvests in a makeshift operating room hidden in a dilapidated meatpacking warehouse in lower Manhattan. Unable to resolve the excruciating moral dilemma faced each time he invades the body of an unwilling victim, David McBride fights to free himself from the situation, and in the process, loses everything. When he finally loses the last shred of his humanity, he seeks revenge with surgical precision ... and instrumentation. (-synopsis) 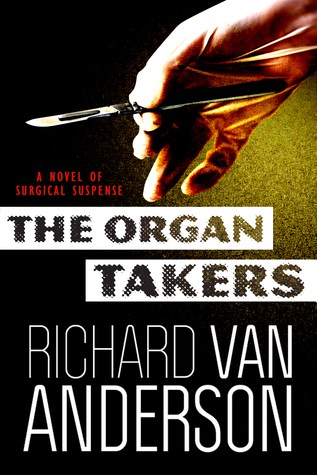 The novel opens up with a man waking up in an ally. As he struggles to get to his feet he feels a pain so severe he doesn’t know if he can get up. He falls to the ground in excruciating pain. When he comes to he manages to stagger out of the ally to the street corner where he collapses. The paramedics find him and rush him to the hospital where he dies in the ER.
NuLife is a company that is trying to create perfect organs for transplant. They want to grow them and have them so that people on the transplant list don’t have to wait endless months for a match. Andrew Turnbull, once a highly rated surgeon who was caught in a scam of moving patients to the top of the transplant list for money, is the head researcher and owner of NuLife. His dream is to win the Nobel prize and he’ll stop at nothing to reach his dream.
David McBride was going to be one of the best transplant surgeons in the nation. Then he discovered what Andrew Turnbull was doing and didn’t report him. He lost his medical license and the chance to be a doctor. He is now a lab technician and he and his wife are living in a tiny apartment in a bad neighborhood with his father who has dementia. Life is not going well for David.
Then one night a man named Mr. White sees him in the park. He offers him $20,000 per surgery to remove organs from patients at a secure location. It seems of to David and he refuses. Unfortunately Mr. White has photos of David, his wife, his father, and knows things he could only know from bugging the apartment. David has no choice but to remove the organs from the patients.
When David goes to his first surgery it’s in an old warehouse. When the patient arrives he is combative and homeless. David now realizes they are not just operating on patients being paid for their organs, they are illegally obtaining the organs they are selling. He wants out but he can’t endanger his pregnant wife or his father.
Kate is a police office. Her father was the chief medical examiner for the county and she knows a lot about both police work and medical work. When she gets a call from a nurse to check out a homeless, schizophrenic man who says his kidney was stolen she doesn’t know what to think. After meeting him and speaking to him she thinks he’s right. Someone is stealing the kidneys of people who are homeless and mentally ill in hops that no one will believe them. Now Kate is determined to figure out who is doing it and why.
This is an action packed book that has a lot of unknowns. Mr. White is a person with much knowledge and power but we don’t know who he really is. There are other doctors and nurses working on the transplants as well and they are all being forced or blackmailed into it. Who is pulling the strings of this illegal operation and for what reason? Will Kate be able to stop them?
I found David McBride to be a kind but sad individual. He wants to do right by his wife and his father but he keeps being placed in situations that are illegal but he can’t do anything about them. He tries his best to find out who is behind the stolen organs but he gets into more trouble than he can imagine. He’s one of those people always in the wrong place at the wrong time.
Kate is a strong female character. She’s smart, knows a lot about the medical field, and has a knack for knowing when someone is lying and when they are telling the truth. She knows someone is stealing the organs and after some interviews she knows who. The only problem is she can’t prove it. Working with her partner, she tries to connect the dots so that they can make an arrest and stop the harvesting of organs from the homeless.
This is a great book if you like medical thriller. I learned a lot from it and it was interesting to read. I kept wanting to find out what was going to happen next and if Andrew Turnbull was finally going down. The only thing I didn’t like was the extent of the medical talk. It was often way over my head and I didn’t understand it which only made it confusing.
I give this book 4 out of 5 stars.