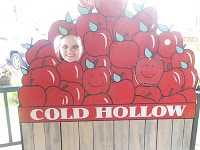 When we went to Stowe, Vermont this summer we had the pleasure of going to the Cold Hollow Cider Mill.  It was a neat place where we could see into the kitchen where they were baking and could take a look at the how they produce cider.  The only problem was that the cider mill had run out of cider, so the only thing we really got to see was them baking.  We were there right before apple season, so we missed out but it was still a neat place to go and I got to take this awesome picture.
While we were there we got to try the apple cider donuts that we watched the bakers make in the kitchen.  I expected them to taste like apples but they didn't.  They were moist, sweet, and topped with cinnamon and sugar.  It was love at first bite for both Frank and I.  I knew I'd have to find a recipe and try my own. 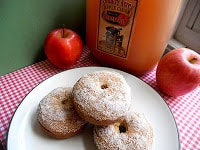 Well apples are in season and there is cider everywhere.  I picked up a jug and went to work.  The recipe I found called for frying the donuts, but I'm very partial to baking them in my donut pan.  These donuts did not disappoint.  They were cake donuts that were sweet, just a bit tangy, and had the cinnamon and sugar sprinkled on top of them.  The donuts weren't exactly the same as the fried apple cider donuts we had in Vermont but they were a great substitute.

1.  In a small saucepan over medium heat, bring the apple cider to a simmer.  Reduce heat to low and simmer uncovered for 15-20 minutes or until the cider has reduced to ⅓ cup.    Set aside to cool.

2.  Preheat the oven to 400 degrees.  Spray a donut pan with cooking spray and set aside.

4.  In another medium mixing bowl cream the butter and sugar until smooth.  Add in the egg and continue beating.  Mix in half the flour mixture.

5.  Stir in the milk and then add the remaining flour mixture.  Stir until well combined then add in the apple cider.  Mix until just combined.

6.  Fill the donut pan ⅔ of the way full and put into the oven for 8-11 or until the donuts are golden brown.  Remove from oven and put on a wire rack. 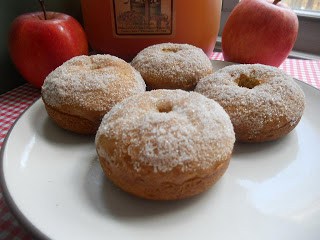