We love eating Chinese and besides hot and sour soup, our other favorite is the classic wonton soup.  It's simple, it's full of flavor, it's delicious.  The soup is a basic recipe.   The hard part was the wontons. 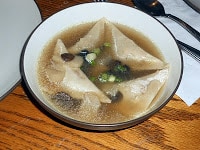 I decided to make the soup into a crock-pot soup so I could make it early in the morning and come home to a hot dinner.  I made the wontons the day before, cooked them in the oven until they just started to brown, and then put them in an air tight container.  The next day I simply dropped them in the soup and enjoyed it for dinner.

The soup was good but the wontons are where it's at.  They were absolutely delicious.  The bits of pork were sweet and spicy and went perfectly in the soup base.  The wontons could be made by themselves and fried to a golden brown and served as an appetizer.

1.  Combine all of the soup ingredients in a crock-pot and cook on low for 8 hours. 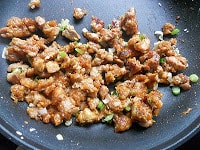 1.  In a small skillet over medium heat cook the chopped pork loin for 5-7 minutes until it is no longer pink.  Remove from heat and place in a mixing bowl.
2.  Add the soy sauce, chili paste, oyster sauce, ginger, sesame oil, garlic cloves, and cornstarch to the mixing bowl.  Stir until well combined. 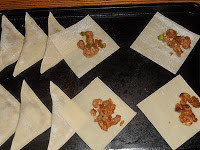 3.  Put a teaspoon of filling in each wonton, moisten the edges with water, and press firmly to seal into a triangle.  Add to boiling soup for 5 minutes and enjoy. 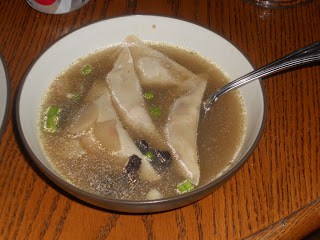