220 shares
When I decided to have my book club over for brunch the first thing I knew I wanted to make was homemade donuts.  Everyone is always amazed by homemade donuts but the real secret is just how easy they are to make, especially in a donut pan.  Baking the donuts is so much less fattening and they taste just as good, if not better, then store bought donuts. 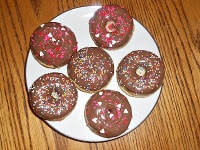 I’ve tried several different flavors but I wanted to go with a plain cake donut with chocolate glaze.  I immediately went to Nicole’s blog (Prevention RD) because she has a ton of great baked donut recipes.  I wasn’t disappointed!  The cake donuts puffed up golden brown in the oven and the chocolate glaze was amazing.  On my test run my husband and I ended up sharing a half dozen-we just couldn’t stop eating them!  The best part is, eating 3 of these donuts is still less fat than one store bought fried donut so I didn’t feel nearly as guilty as I normally would have! 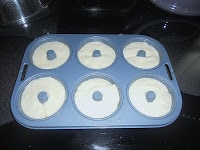 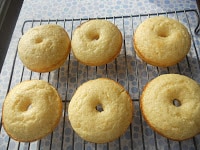 6. Spoon the batter into the donut pan so that it is ⅔ of the way full. Bake for 7-9 minutes or until the tops of the donuts spring back when touched.

7. Remove from the oven and allow to cool for 2 minutes before removing the donuts from the pan and placing them on a cooling rack.

8. Place the chocolate chips in a microwave safe bowl and microwave on high in 30 second intervals until the chips are melted. Mix in the vegetable oil. Dip the tops of each donut into the chocolate glaze then set back on the cooling rack. Immediately sprinkle with sprinkles if desired. 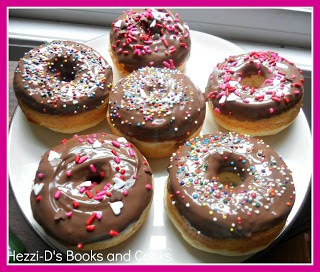