Everyone has a bad day. Graduate student Ian Nash has lost his girlfriend in addition to being dropped from a Ph.D. program in theatre at a Southern California university. When he stops at a local coffee shop in the lobby of a bank to apply for a job, the proverbial organic matter hits the fan. A gang of four robs the bank, and things get bloody. Ian is taken hostage by the robbers when the police show up. Now he has to save his life.

FBI Special Agent Aleece Medina's analysis of the bloody bank heist drives her into the pursuit of a robbery gang headed by two women. She doesn’t anticipate how this robbery will pit her against both the bandits and the male higher-ups in the FBI while the media heats up during a giant manhunt.
The robbers are about to kill Ian, and all he has at hand is his knowledge of the stage.  (-synopsis from Goodreads) 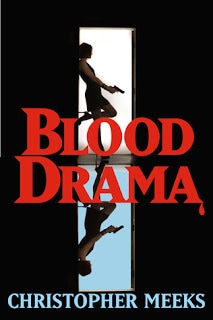 I liked this book because it was different from the typical thrillers and mysteries in that we knew who the killers were because Ian was the hostage from the bank robbery and he escaped alive.  Ian is having a bad day and it gets even worse when he is kidnapped.  He is whisked away to a secret hideout where one of his captors beats him while the others want to let him go.  While he is tied up he keeps track of the names the captors call each other as well as details the unwittingly share about their lives.

After Ian is drugged and wakes up confused on the laundry room floor he somehow manages to escape and allude his captors.  They leave in a panic and he is able to call the police.  Aleece Medina shows up and Ian's heart swoons at the sight of her.  She asks Ian about his kidnapping but the facts just don't add up.  Later on that night she's called to the same house where she finds Ian shot and another FBI agent killed by one of the captors.

Soon Aleece isn't sure what to believe about Ian.  Ian isn't even sure what he remembers about the details of the kidnapping.  In between trips to the hospital, a trip to the police station, and a nurse getting killed the two of them start acting like partners and are hot on the trail of the bank robbers.  Aleece's boss isn't happy with her progress and when he threatens to take her off the case she and Ian run to Minnesota where they have a lead.

This book is fast paced and fun to try to follow the leads.  I also enjoyed watching Aleece and Ian fall for each other and at the same time get fed up with one another.  I found Ian to be an honest guy who just wants to get back at the people who harmed him.  He's quirky, a little awkward, but he wants to do the right thing.  Aleece is strong, tough, and doesn't want love to get in the way of her career.

Together Aleece and Ian hunt down each bank robber which then leads to the next.  The only problem is one of the robbers is hunting down Ian as well.  The ending came to a satisfying conclusion although some of the final details were a little far fetched for me.  All in all it was an easy and enjoyable read.