Our book club pick for July was The Adventures of Huckleberry Finn by Mark Twain. I first read this classic when I was a junior in high school. I remember thinking it was an enjoyable book with likeable characters. It was a quick read and one that I had found fun.

The book is a journey with the main character, Huckleberry Finn. Huck runs away from his abusive father and meets up with Jim, a runaway slave whom he knew at his former home. The two travel together down the Mississippi River on raft stealing what they need to survive. They have many adventures together including outwitting thieves and would-be murderers, Huck pretending to be a girl to find out if his father is still looking for him, rescuing two men who claim to be royalty, and trying to give Jim his freedom. In the end, Huckleberry Finn and Jim end up right back where they started in their home town.  We find out what has happened to all the characters, including Jim, Huck's father, the widow, and other major players.  The story ends with an offer to adopt Huck, and Huck deciding what he really wants out of life.

I was excited to read this story again as an adult. This time around it took me longer to read and was not so enjoyable. I remembered Huck as being a fun-loving jokester. I now found him to be irresponsible and just down right mean when it comes to Jim, the runaway slave.  While it was still an easy book to read, it just wasn’t as good as I remembered it.

I think I enjoyed it more as a teenager because of the adventure factor. The excitement of running away and being on your own, taking on bad guys, stealing to stay alive, and just the joy of traveling.  I wished that I could be more like Huck Finn.  I could imagine having those crazy adventures and being on my own.  However, as an adult, I can see just how crazy his adventures were.  It's hard to imagine that Huck would be able to outsmart the villians the way he did.  It no longer seems fun to sleep on a raft and go hunting for food.  I also hated the way that Huck treated Jim, the slave.  He played tricks on him and made him out to be stupid.  The use of the word "nigger" is freely used throughout the book when speaking of Jim.  I understand that times were different when the story was written, but it left me feeling uncomfortable.  I think that young adults would enjoy this novel more then adults would.
I give this book 3 out of 5 stars. 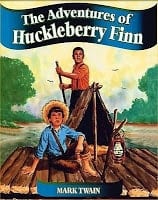