Our book club book for the month of June was The Book Thief by Markus Zusak. I wanted to make sure I reviewed this book because although it is written for young adults, I actually think it’s a better read for adults because of the length (over 500 pages) and the content of the novel. After reading a synopsis of this book on the Internet I was skeptical as to whether or not I would actually enjoy it. It sounded like another book set in Nazi Germany. Turns out it was an amazing book that had me in tears at the end. I really felt as though I were invested in the characters in this story. 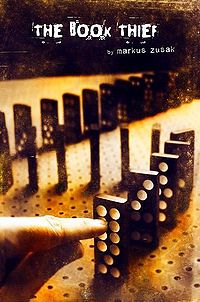 The novel is set in Nazi Germany. The book thief is a young girl named Liesel Meminger. The twist right off the start is that Death is telling this story from his point of view. He becomes interested in Liesel after he first sees her when he takes her young brother from her. Soon after the death of her brother, her distraught mother gives Liesel to a foster family, the Hubermanns.
The Hubermanns treat Liesel well, though her foster mother often swears at her in German. Han’s, the foster father, teaches Liesel to read using the books that she has stolen. He also offers her comfort during her numerous nightmares.
The plot takes a wild turn when the Hubermanns take in and hide Max Vanderburg, a Jew whose father saved Han’s life in World War I. Max and Liesel become quick friends, spending much of their time reading the stolen books. Liesel quickly learns that her foster father doesn’t agree with what Hitler and the other Germans are doing to the Jews.
The story goes through the trials of keeping a Jewish man hidden in the basement. It has stories of friends and loved ones going off to war. Eventually the war itself comes to Himmel Street and the neighborhood begins to come under attack. The book ends with a twist I never saw coming.
I really enjoyed reading this book from Death’s perspective. It gave the book an interesting point of view that otherwise wouldn’t have been there. In this novel, Death is actually sorry for what he does and doesn’t seem to enjoy his job at all.
There was a lot of history to the story, but also a lot of character development. I wanted Max to survive and not be found in the basement. I wanted Liesel to continue to learn how to read her books and to be strong for her family. I hoped that Hans would stand up to the Germans and tell them how he really felt.
I enjoyed the uplifting moments like when Max creates an entire book for Liesel, or when Han’s stands up for an older Jewish man being marched off to a concentration camp. I was saddened when they fell on hard times, such as when stores are destroyed, towns are bombed, and when Max leaves the Hubermann’s home when the German’s come to their small town. The end of the story had me sitting on the edge of my chair wanting to know what happens to Liesel, Max, and the Hubermann’s. The final chapter did not disappoint. It was emotional and came to an end I was not expecting. This was a book that had me engaged until the very end.
I give this book 4.5 out of 5 stars.