Cherringham is a quiet and peaceful town in the Cotswolds. Time moves slowly here, and nothing out of the ordinary ever happens, until one morning a woman’s body is discovered in the river. Sarah Edwards has just returned to Cherringham with her two children following the breakdown of her marriage. Sarah had been friends with Sammi Jackson – the woman in the river –before they both moved to London and she’s certain there is more to her death than meets the eye. But juggling the school run and her job as a web designer doesn’t leave much time to solve murder mysteries.

After the death of his wife, former NYPD homicide detective Jack Brennan has retired to Cherringham hoping for a quiet life. He soon realises “peace and quiet” isn’t really him and, despite his misgivings, he’s persuaded by Sarah to help her look into Sammi’s death. It quickly becomes clear that the case isn’t as simple as the police hope. From her violent ex-boyfriend to her alcoholic father, it seems everyone has something to hide. Sarah and Jack will need to use all their wits to get to the bottom of this case.

"Cherringham - A Cozy Crime Series" is a series of twelve self-contained episodes. A new case for Jack and Sarah is released each month.  (-synopsis) 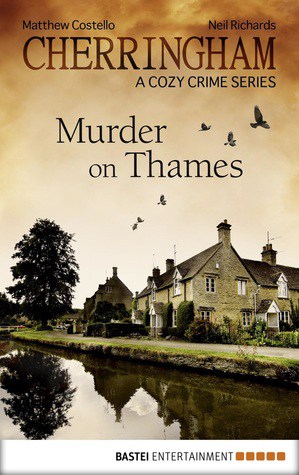 The novel opens with an old woman walking her dog when she stumbles upon the dead body of Sammi, a woman who used to live in Cherringham.   The police immediately decide that Sammi's death was an accident.  She had too much to drink, fell down the hill, and drown.   When Sarah hears about the accident she can't believe that's what really happened.   Sammi was her childhood best friend and she decides to do soem investigating on her own.

When she comes across the American who lives on a boat, she finds he's less then helpful.  Little does she know that he is Jack Brennan, retired NYPD.   While he most definitely doesn't want to get involved, the more he thinks about what happened, the more he thinks it's murder.   Jack calls up Sarah the next day and soon the two are going undercover.   They have a list of suspects and what the suspects are saying just doesn't add up.  Did Sammi really fall or was it murder?  Who would kill and why?  Why was Sammi back in Cherrington after all these years?

This is a short, fast, and fun mystery.   Sarah and Jack are both inquisitive and despite their difference in age, they work well as a team.  Sarah knows the town and Jack knows how to ask the questions.  The pair begins chasing all the leads they have since the cops don't believe it was murder.

I did think that there were a few spots when a chapter ended abruptly or a random detail was thrown in at an odd point.   But overall I found this to be an easy to read mystery and I look forward to reading the next installment.