A mother tells the journey of her daughter's recovery from Autism and Sensory Processing Disorder to Functioning Recovery and independent living, giving tips to parents on how to navigate the medical and educational domain. This story is an example of the unique obstacles facing a parent raising a child with Autism. The challenges they face getting supports.

What is Sensory Processing Disorder, CranioSacral Therapy and Bio-Medical Therapy, and what roles they play on the road to Functioning Recovery and independent living? See actual projective trials pertaining to sensory supports. Is educational discrimination the reason there is difficulty getting help in school? As this story unfolds it provides useful tips to other parents to help them on their journey with their child. This story is notable because this mother's daughter was successful overcoming numerous obstacles while providing useful tools, inspiration and hope to others.  (-synopsis) 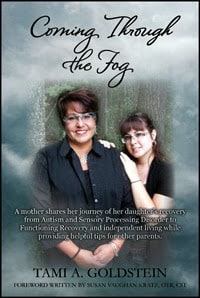 I found this book to be interesting in that Tami had a lot of struggles finding out what exactly was going on with Heather.  When Heather first started exhibiting characteristics of a child with autism there wasn't a lot known about the spectrum disorder.  Tami had to go through multiple doctors, therapists, OT's, and other individuals before she found ones that understood her child.

As a special education teacher I've had many students with different forms of autism through the years.  I also have two nephews with autism so it is something that I've read up on, studied, and attending conferences about.  I've learned so much about this spectrum disorder that I'm sure the average person doesn't know.

I like that one of the people quoted in the book is Dr. Greenspan.  I attended a 3 day conference with him in Baltimore.  He had so much welcome information and ideas on how to work with students who have ASD and SPD.  She also quotes Temple Grandin who is probably more familiar to the general public due to the movie made about her life.  She grew up in a time where no one knew what autism was but she used what she knew to create a "hug box" for autistic children as well as developing a system to soothe cattle being moved.

While I thought this was an interesting book and it was one where a mother was telling her story I had trouble reading some of the sections about Heather in school.  I'm aware that Tami probably had a skewed view of what was going on because she was concerned about Heather but some of the things that occurred, such as with holding testing from a parent, are illegal.  I also found it discouraging how doctors kept telling her she was just a bad parent.  I think that is something that still occurs today, even though parenting skills have nothing to do with ASD.

At times I had difficulty following the timeline and what was going on because there was a break in between paragraphs in each chapter and it jumped from one year to another.  I do think this would be a good resource for anyone who has a child on the autism spectrum because there are good tips included in the book and it's nice to know that you aren't alone when struggling to find help for your child.

As a side note, if you suspect your child has autism spectrum disorder, the most important thing is early diagnosis and intervention.  Children that are diagnosed early and receive therapies early on have a better chance of being successful.