0 shares
THIS INTERNATIONALLY ACCLAIMED SUSPENSE THRILLER by Michael Meyer has been compared to Robert Ludlum’s Bourne series, and the writing style has been compared to that of Dean Koontz. #2 on Recommended Thriller/Suspense list at Goodreads
Imagine waking up remembering intimate details about a country in which you have never traveled and fluently speaking a language that you have never spoken. B.J. is living the ideal life. He has a great wife, a wonderful job. And yet he is experiencing life-like vivid dreams of Munich, a city he has never visited.
Stan Halsey is a professor in Saudi Arabia, who sends for his wife to join him. She arrives, and, in the blink of an eye, she vanishes, leaving no trace of ever being alive in either the United States or in Saudi Arabia.  COVERT DREAMS is a fast-paced international suspense thriller that moves from Munich to the burning sands of Saudi Arabia. What is real, and who is responsible for the terrifying nightmare? 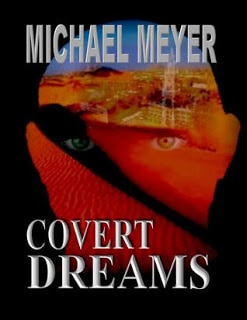 This book is a fast paced thriller that kept my attention throughout.  There are two main characters and each has his own plot going on in the book.  First we have BJ, a hard working man who is trying to earn a living.  Things are going well until he starts having reoccurring dreams of a city he's never visited and a woman he does not know.  As the dreams turn into nightmares his life begins to unravel.

Then there is Stan.  He and his wife decide to start over after the death of their son and the plan is to take a job in Saudi Arabia.  Stan arrives first and when he goes to the airport to meet his wife he finds she isn't there.  When he reports her missing he finds that there is no record of her existence.  There is no visa in her name, no flight itinerary, nothing.  Since no one believes she is real he begins the hunt to find her himself.

This was a griping book with these two men as the central characters.  Both are going through their own nightmare on their own.  The characters were well developed and I wanted to know what was going to happen to them next.