Francijn of Koken in de Brouwerij was our January 2013 Daring Bakers’ Hostess and she challenged us to make the traditional Dutch pastry, Gevulde Speculaas from scratch! That includes making our own spice mix, almond paste and dough! Delicious! 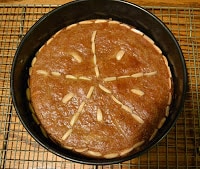 I was both excited and intrigued by this recipe.  The spices were an interesting combination that I wouldn't normally put together.  There were several spices that were mandatory to the recipe but others that could be added in.  I tried a few different combinations and the one below is the one I liked the best.

The almond paste was extremely easy to put together.  I had no idea that it only took 3 ingredients to make.  The pastry dough was also fairly simple to make.  I had difficulty when I was rolling the dough out.  It wanted to stick to the table and break apart when I tried to pick it up.  It smelled divine though with all of those spices mixed into it.

The cake smelled amazing when it was baking in the oven.  Our entire house smelled like sweet spices.  It's also a beautiful cake with the deep golden brown color  and decorated with the pale almonds.  I wasn't quite sure what to expect but I was blown away!  The Speculaas was absolutely delicious.  The edges are crispy and the pastry is sweet and spicy.  The almond paste filling is flavorful, delicate, and pairs wonderfully with the pastry.

Both my husband and I really enjoyed this dessert.  It also was a great sweet breakfast along with a cup of coffee!

1.  In a small bowl combine all the speculaas spices.  Mix well and store in an air tight container.

2.  Pour the slivered almonds into a food processor.  Process for 1 minute or until the almonds are ground.  Add in the sugar and process for an additional minute.

3.  Add the egg to the food processor and process until it forms a paste.  Place the almond paste in an air tight container and keep in the refrigerator for up to 1 day.

4.  To make the dough combine the flour, baking powder, sugar, salt, and spices in a bowl.

5.  Cut the butter into pieces and add to the flour mixture.  Knead until smooth. Wrap in plastic wrap and put in the refrigerator for two hours.

8.  Remove the dough from the refrigerator and divide into two pieces.  Roll one piece out on a lightly floured surface.  Place in the bottom of the springform pan.  (My dough broke into pieces so I just pressed it into the bottom of the pan.)

9.  Lightly beat the egg and water together.  Brush ⅓ of the mixture over top of the dough in the pan.

10.  Roll out the almond paste between two pieces of plastic wrap until it is as big as the pan.  Carefully place it on top of the dough in the pan.  Press the paste down lightly to fit into the pan.  Brush with ⅓ of the egg mixture.

11.  Roll out the remaining piece of dough on a lightly floured surface.  Place it on top of the almond paste and lightly press down.  Make the top as smooth as possible.

12.  Brush the last ⅓ of the egg mixture over top of the dough.  Decorate with almond slivers.

13.  Bake for 40 minutes.  Remove from oven and cool completely on a wire rack.

14.  Run a knife along the edge of the cake and then release from the springform pan.  Cut into slices and serve.

15.  Cooled speculaas can be wrapped in plastic wrap and stored at room temperature for up to 3 days. 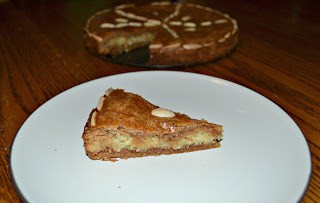