For Christmas this year I didn't have much on my list.  I wanted a few cookbooks, a subscription to Cook's Illustrated, a few novels, and the pasta attachments for my Kitchen-Aid Mixer.  Can you tell what I like to do?  I never would have thought of the pasta attachments but after making pierogies with my dad this summer I had to have them. 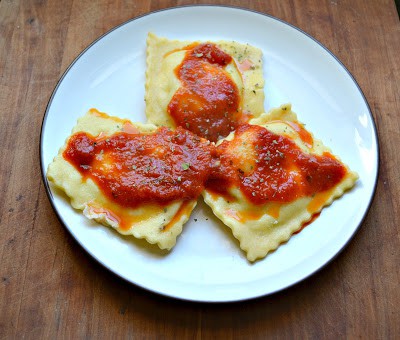 Several weeks before Christmas one of my friends at work told me she got the pasta attachments.  She was excited to get making pasta as well.  I pleaded with my mother one last time to please get them for me for Christmas.  When we got to my parents on Christmas morning I glanced at the boxes and didn't think I saw them.  However, when I picked up my last gift I knew by the weight it was the pasta attachments.

Fast forward one month and I still haven't tried them.  That same friend who got the pasta attachment posted several pictures of her kids making pasta and said it was so easy that her husband had made pasta several times already.  Well, that was the motivation I needed.

I picked a three day weekend and decided to start off bold with homemade ravioli.  I have no idea why but once I had it in my head I went with it.  I mixed together ricotta cheese along with Parmesan, Pecorino Romano, and Mozzarella cheese, mostly because that's what I had in the refrigerator.  I added a few seasonings and some chopped leeks for color and added flavor.

The first set of ravioli I made were huge.  I didn't realize it until I cut them out but they were stuffed too full and way too big.  I made a few adjustments and the rest turned out perfectly.  I wanted to freeze them to eat later on in the month but we each ended up having 6 ravioli for lunch.  They were delicious.  The pasta was firm and the inside was cheesy and delicious.

1.  Combine the flour, eggs, and salt together in a food processor.  Process until combined but crumbly.

2.  Add water 1 tablespoon at a time, kneading after each addition, until a smooth dough forms.  Wrap in plastic wrap and allow to rest 30 minutes.

3.  Meanwhile,  combine all the filling ingredients in a medium bowl and mix well to combine.  Refrigerate until ready to use.

4.  Unwrap the pasta dough and divide into 4 pieces.  Working with 1 piece at a time put the dough through the pasta roller on the largest setting.  Continue putting it through until it is on a setting in the middle.

5.  Place the pasta sheets on a table dusted with flour.

6.  Place a small teaspoon of filling on the pasta sheet every 2-3 inches.  Brush the pasta with water along the top and in between the filling.  Fold the bottom of the dough up over top of the filling and press around the filling to seal. 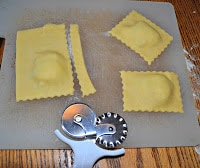 7.   Using a pastry cutter trim around the ravioli cutting them into squares.

8.  At this point either place the ravioli in a bag to freeze or put in the refrigerator for up to 1 day.

9.  When ready to serve bring a pot of salted water to a boil.  Add 4 or 5 ravioli to the water and boil for 3-5 minutes or until the ravioli float. 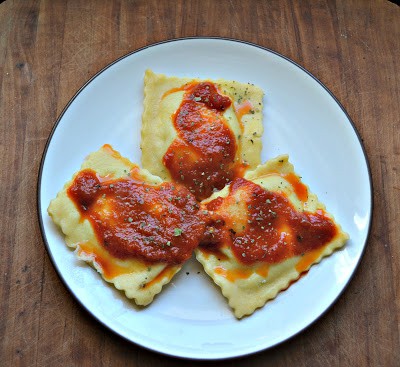