This is a Sponsored post written by me on behalf of Jack in the Box for SocialSpark. All opinions are 100% mine.

Do you ever remember a night when you were so hungry you'd do anything to get a late night snack?  When i was 18 a group of us went to a football game and on the way home we had to get something to eat.  We had no car and most of the fast food restaurants in town were closed.  Being so hungry we walked over 2 miles to a grocery store and finally stocked up on soda and chips!

Luckily I don't have to worry about my late night munchies anymore!  Jack in the Box in introducing their new Late Night Munchie Meals.   Jacks Munchie Meals come with enough food to fight your late night hunger and are available from 9pm until 5am.   Every meal comes in a box and is served with 2 tacos, halfsies (half curly fries, half French fries), a 20 oz. drink and is available in four mouthwatering choices. 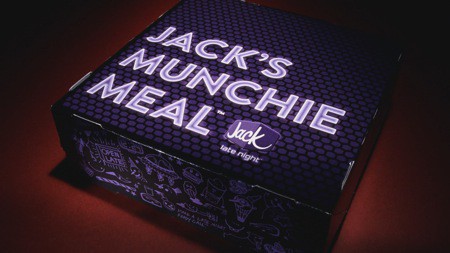 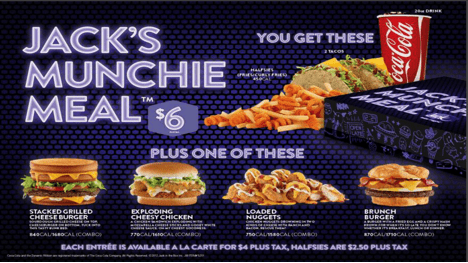 It's so easy to go to Jack in the Box and choose one of the four amazing Munchie Meals including:

- Stacked Grilled Cheese Burger: Sourdough grilled cheese on top, Cheeseburger on bottom.
- Loaded Nuggets: Chicken nuggets drowning in two types of cheese with ranch and bacon.
- Exploding Cheesy Chicken: A chicken sandwich exploding with mozzarella, cheesy sticks, and gooey white cheese sauce.
- Brunch Burger: A burger with a fried egg and a crispy hash brown for when it’s so late you don’t know whether its breakfast, lunch or dinner.

Personally I can't wait to try the Exploding Cheesy Chicken!  My husband calls me and chicken and cheese kind of girl and I'm think a chicken sandwich with gooey cheese sauce and mozzarella cheesy sticks is my kind of late night meal!  Plus, I'm someone who can never choose between curly fries or French fries so I love that both are included.

So, are you ready to drive to your local Jack in the Box and try a Munchie Meal?  Which Late Night Munchie Meal do you want to try first?   Make sure to like Jack in the Box on Facebook and follow them on Twitter and let them know which one you are most excited about!