A Life For a Life by Lynda McDaniel

When a young woman is found dead in a wilderness area of the North Carolina mountains, the county sheriff says suicide. Della Kincaid disagrees. As a former reporter in Washington, D.C., she knows how to hunt down the real story. But she's living in Laurel Falls, N.C., trying to revive a struggling general store and create a new life for herself. Without her usual sources, she turns to an unlikely cast of characters—friends, customers, ex-husband, and forger. With their help, she uncovers how unbridled greed has spawned an interwoven series of crimes and sorrows. Along the way, Kincaid discovers how much the Appalachian landscape and its people mean to her.

Lynda McDaniel, award-winning author of 15 books, has woven together true events from her early years living “back to the land” in Appalachia with an intriguing mystery story.

"A Life for a Life," an autobiographical mystery novel, shares funny, moving, and surprising stories from those years. You'll meet a cantankerous laundromat owner who was just as weird as Lynda portrayed her, and a gentle giant of a beekeeper whose love for his family was as big as he was. And Cleva, who's based on a lovely woman who taught Lynda how to can tomatoes and make the best blackberry jam you've ever tasted. Many of the other characters are fashioned after real people who opened their hearts to this deer-in-the-headlights city slicker. Lynda had moved to the mountains of North Carolina to see what rural life was all about. Over the years, she realized that everything that is important to her today—she learned in her Appalachian home.  (-synopsis) 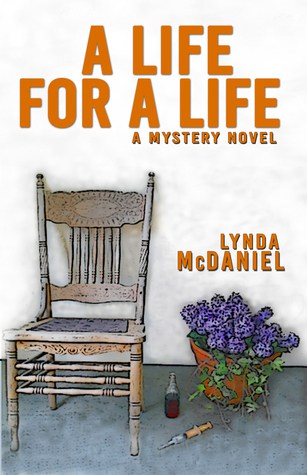 This book is about an unlikely pair of friends, Della and Abit.   Della is from Washington, DC where she a journalist.   She got tired of city life and moves to a small town in North Carolina where she buys a small general store.

Abit is a teenage boy who no longer goes to school.   He has some disabilities and spends his days outside the store which used to be owned by his father.    Now Della is the new owner but she likes Abit hanging around.  The two form an unlikely friendship through the story.

One day while Della is walking her dog in the woods she comes across the body of a young girl.  There is a suicide note sitting beside her but something strikes Della as odd.   While the sheriff believes it to be an open and shut case of suicide, Della isn't so sure.

The book goes on as a mystery into not only who killed Lucy but who she was.   No one comes forward to say they are missing her and the sheriff doesn't know who she is.

Along the way we meet the people who live in the town and learn about their lives.  We see how Abit gets along with his family and the others in the town.   We learn about Della and her relationships.

I found this book to be a little slow paced.   While it was a quick read there were parts where I put the book down because I needed a break.  I was expecting a flat out mystery but a lot of the book was about the people of the town and the relationships between them.

I think people who enjoy slower paced cozy mysteries would enjoy this book.   I thought it was a well written book with good character development but I would have liked it to be faster paced.