Lou Clark knows lots of things. She knows how many footsteps there are between the bus stop and home. She knows she likes working in The Buttered Bun tea shop and she knows she might not love her boyfriend Patrick.

What Lou doesn't know is she's about to lose her job or that knowing what's coming is what keeps her sane.

Will Traynor knows his motorcycle accident took away his desire to live. He knows everything feels very small and rather joyless now and he knows exactly how he's going to put a stop to that.

What Will doesn't know is that Lou is about to burst into his world in a riot of colour. And neither of them knows they're going to change the other for all time.  (-synopsis) 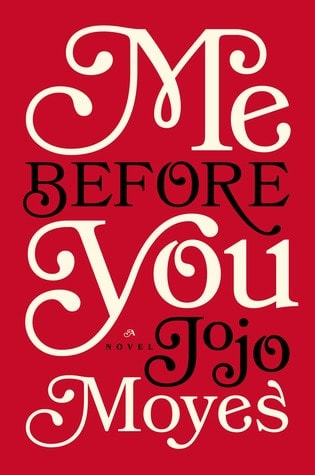 Lou Clark is a 20-something who loves her job at the Buttered Bun.   She's been there for over 6 years and is happy to work there.  She lives at home with her parents, her grandfather, her sister, and her nephew.   She's had the same boyfriend for many years.  Things are pretty steady until her boss tells her he's closing the Buttered Bun.

Soon Lou is rushing to find a job.  She has no job training but needs something to help her pay the bills.  Her parents rely on part of her salary to help managing the house.   After going through many jobs the one she finds is with a quadriplegic who is in his early 30's.  There is no medical training needed as he has a nurse.

Lou is unsure about this position but the pay is high.  She goes in and meets Will Traynor.  Will is bitter about the accident that left him as a quadriplegic.  He doesn't want Lou around trying to cheer him up and Lou isn't really sure why she is there.  She spends her days cleaning the house and asking Will if he'd like food or tea.

After a month or so Lou and Will fall into a comfortable space where they talk throughout the day, watch movies, and listen to music.  Will learns that Lou can be funny and brightens up his day while Lou finds that Will makes her feel important in her job.  The two start becoming friends.

Just when things are going well Lou overhears a conversation between Will's mother and sister.  She learns the real reason she's been hired to be with Will and it changes everything.  Lou now knows that her role is more important then she ever thought and realizes that Will is becoming more and more important to her as well.

Lou is such a great character.   She's in a place in her life where she's getting older, still living at home, and needs a new job.  Working with Will is a game changer and she realizes she likes working with him and tries hard to do her best.  She's concious of how he's feeling and tries to take that into account throughout their outings.  She is realistic but sticks to her guns when it means the most.

I didn't like Will much in the beginning.  I thought he was mean and bitter.  However, as the book went on I liked him more and more.  He seemed to like seeing Lou and actually started smiling when she was around.

Tehre are so many smaller characters in this book as well that add so much to the story.  From Will's mom, dad, and sister to Lou's boyfriend, parents, and sister.  Then there is Will's nurse, Nate who plays a great supporting role.

This is a wonderful story for anyone who likes light romance novels or novels about people overcoming a disability.