This week's recipe exchange was for a side dish.  I received a recipe for roasted Mexican potatoes.  Now I love just about all things potato and I really enjoy roasted potatoes so I was glad for a new potato recipe to try.  We grilled out a London Broil and had these potatoes as our side dish.

They smelled amazing as they were cooking in the oven.  The potatoes came out crispy on the outside and soft on the inside.  The flavor was vaguely Mexican and the sprinkle of lime juice on top was really great! It gave the potatoes the added kick they needed. I dipped mine into some sour cream to complete the Mexican flavor.  This dish is easy to make and really tasty-we'll be having it again soon! 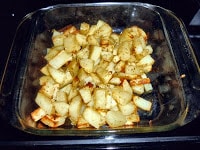 1.  Preheat the oven to 425 degrees.  Spray a baking dish with cooking spray.

2.  In a bowl combine the oil, oregano, cumin, salt, peppers, garlic, and mustard.  Toss the potatoes in the mixture until well coated.  Bake in the oven for 30 minutes, stirring every 10 minutes.

3.  Remove from oven and sprinkle with fresh lime juice.  Serve with a lime wedge and sour cream. 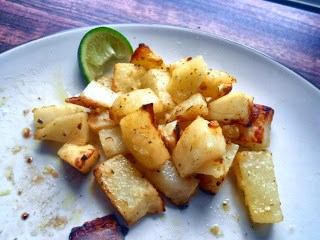 ﻿This post linked to:
It's A Keeper Thursdays, What's Cookin' in the Kitchen
Fat Camp Friday, Seasonal Sundays