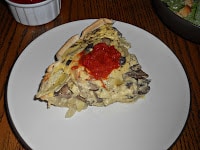 About a year ago we decided that we had entirely too much meat in our diet and began eating meatless meals at least twice a week.  Since that time we've added a third meatless meal most weeks.  Initially I had difficulty looking past pasta for my meatless meals but we've found a world of delicious meatless dishes.  We now enjoy pasta, quiche, bean burritos, black bean burgers, tofu, and many other meatless dishes.

My husband recently bought me a subscription to Vegetarian Times and I've found many of our recent dinners in this magazine.  I saw a great vegetarian frittata but unfortunately for me I don't have a skillet that is oven safe so I had to make it in a pie pan.  Then my husband decided he wanted a crust on this dish so it turned out as more of a quiche then a frittata but it was still delicious.  The quiche is fluffy and light with great flavor from the vegetables and herbs.  The real star of this dish is the red pepper puree.  It brightens the dish in both color and flavor.

This week #SundaySupper is all about budget recipes and I find that cooking vegetarian several times a week is definitely a way to save money in my budget.  The cost of this quiche is under $10 and easily feeds 4. 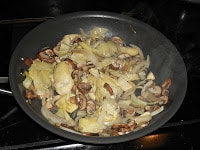 2.  Place the pie crust dough in a pie pan.  Crimp the edges and set aside.

3.  Spray a large skillet with nonstick cooking spray.  Heat over medium high heat and add in the mushrooms, onions, and salt.  Cook for 5-7 minutes or until the mushrooms have browned.

4.  Dice the artichokes into quarters and add to the skillet along with the garlic.  Cook for 3-4 minutes.  Remove from heat. 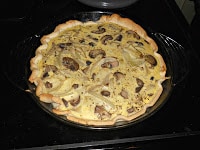 5.  In a large bowl beat the eggs together.  Whisk in the tarragon, oregano, black pepper, and cheese.

7.  Cook for 30-35 minutes or until the center of the quiche has set.  Cool for 5 minutes before cutting.

8.  Meanwhile, place the roasted red peppers in a food processor and process until smooth.  Season with salt and pepper.

9.  Cut the quiche into wedges and serve topped with 1 tablespoon of red pepper puree. 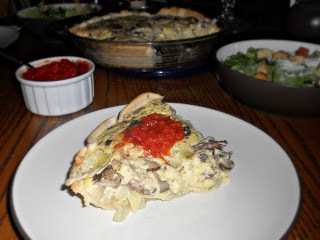 Join the #SundaySupper conversation on Twitter Sunday! We’ll tweet throughout the day and share recipes from all over the world. Our weekly chat starts at 7:00 pm EST. Follow the #SundaySupper hashtag, and remember to include it in your tweets to join in the chat. Check out our #SundaySupper Pinterest boardfor more delicious recipes and food photos.
Coming to Orlando July 19-21, the first annual Food and Wine Conference sponsored by #SundaySupper. Visit the website to learn more and join in on the fun.