Promise Me Eternity by Ian Fox starts off with Dr. Simon Patterson waiting on a dark road for Carlo, the man he wants to kill.  The story then jumps back several months and we are introduced to Dr. Patterson, the surgeon.  Dr. Patterson is the chief surgeon at a local hospital but his real passion is research.  He built a lab in his basement and has been working on a cure for aging. 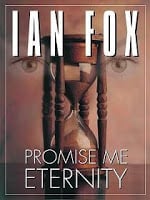 Dr. Patterson's wife Helen despises his research and wishes he would look for a job in a bigger town so that he could make more money.  She's only concerned with money, possessions, and how she looks to the rest of the world.  Simon and Helen fight all the time and their marriage is not a happy one.

Carlo is a mafia man who gets in an accident and ends up at Simon's hospital.  Simon performs surgery on him and saves his life.  To repay him, Carlo invites Simon and his wife to his home for dinner.  Carlo's wife Christine is also at the dinner and Simon feels something for her he hasn't felt in a long time.

So begins the decline of Simon.  His aging vaccine seems to be having the opposite affect.  One colleague at work is angry with him for not making him an associate surgeon while another is angry because he denied her advances.  Simon's wife begins coming home late and won't explain where she's been.  Then finally something wonderful happens when Christine, Carlo's wife, enters his office.  The two of them begin a love affair that takes us to the beginning of the book where Simon is waiting on the quiet road for Carlo.

This book has a huge cast of characters, many of whom do not play an important role to the story.  I had a hard time keeping up with who they were and why they were involved in the story. Many of the characters had large chunks of chapters devoted to them and then the story never came back to them or if it did it had nothing to do with the main storyline.

While the story was some what entertaining I didn't feel as though there was much of a plot.  I kept waiting for something to happen and when something finally did the author rushed through ten years of the story in he last fifty pages of the book.  In other words, it took a long time for the author to go nowhere.

I'm giving this book a rating of 2 ½ stars because while I didn't feel there was much of a plot line and there was a lot of excess included in the book that wasn't needed, it did hold my attention and was somewhat entertaining.