School’s in session at J. Alter Academy, and for Toni, Joseph, Ann, Charlie, and their boarder friends, that means they are still at the mercy of its draconian ways. While suffering the harsh consequences of their attempted escape, the seven teens must also contend with the formidable Headmistress and her taste for human experimentation — with the boarders as her favorite subjects. The seven friends play a delicate, dangerous game as they seek to discover the secrets behind their school and their own unique abilities. Yet as they move closer to uncovering the truth, will one of them be forced to pay the ultimate price?  (-synopsis) 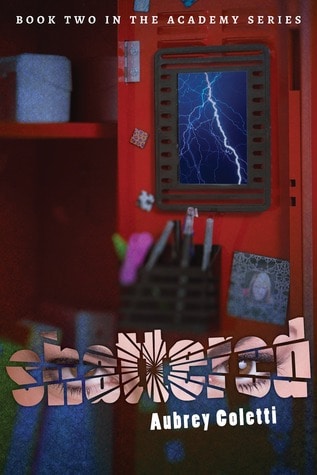 Shattered opens where Altered left off with Toni, Joseph, Ann, Charlie, and their friends being subject to shock treatment because of The Incident.   The Incident occurred at the end of the last book when the friends tried to escape J. Alter Academy but someone turned them in and they all got caught.   Now the students have to wear backpacks that hook them up to shocks throughout the day.

One thing that is new is the Headmistress is now at the school daily.  She's being extra friendly to this group of students though she continues to take them into the basement to experiment with their special skills.   She pretends like the experiments are optional but the kids know they are not.  They also know that the principal doesn't know what's going on.   In an effort to get them to stop, the students start dropping some not so subtle hints to the principal.

Meanwhile, the students special skills are hurting them more then helping them.   Charlie is hearing voices more then ever and is headed toward a breakdown.   Joseph's body temperature is higher then humanly possible and he's been passing out because of it.  Ann is struggling with guilt and it's making her more moody then ever.   Lieutenant is trying hard to keep her mania in check but it's causing her to lose it in other ways.   If the group of students can't find a way to escape the school, they may be heading down a path that none of them will recover from.

As if that isn't enough, the group is also out to get revenge on Seth, the boy who plotted against them and turned them in last time.   Seth knows there's something wrong with the way Toni is acting towards him but he's not sure what it is.  When the two of them meet in the woods one night to run away he finds out exactly what Toni has been plotting and it might just ruin him forever.

This book was exciting and fast moving.   It picked up right where the first book left off.  I can't wait to pick up the third book in the series!