Mickey Bolitar's year can't get much worse. After witnessing his father's death and sending his mom to rehab, he's forced to live with his estranged uncle Myron and switch high schools.

A new school comes with new friends and new enemies, and lucky for Mickey, it also comes with a great new girlfriend, Ashley. For a while, it seems like Mickey's train-wreck of a life is finally improving - until Ashley vanishes without a trace. Unwilling to let another person walk out of his life, Mickey follows Ashley's trail into a seedy underworld that reveals that this seemingly sweet, shy girl isn't who she claimed to be. And neither was Mickey's father. Soon, Mickey learns about a conspiracy so shocking that it makes high school drama seem like a luxury - and leaves him questioning everything about the life he thought he knew.

First introduced to readers in Harlan Coben's latest adult novel, Live Wire, Mickey Bolitar is as quick-witted and clever as his uncle Myron, and eager to go to any length to save the people he cares about. With this new series, Coben introduces an entirely new generation of fans to the masterful plotting and wry humor that have made him an award-winning, internationally bestselling, and beloved author.  (-synopsis from Goodreads) 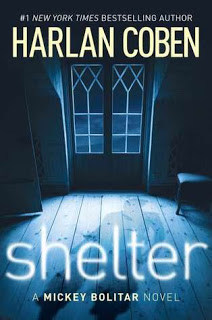 I've been reading Harlan Coben's Myron Bolitar series for years and I love reading his crazy adventures.   So when I heard he was coming out with a young adult series that featured Mickey Bolitar, Myron's nephew, I knew I wanted to read it.

Mickey Bolitar isn't happy living with his Uncle Myron but he doesn't have much choice after his father is killed in an accident and his mother is sent to rehab.  Mickey has to enter a new school where he has no friends and the only person who talked to him, his girlfriend Ashley, disappears suddenly one day.  Mickey doesn't know what happened to her but he's about to find out.

Mickey quickly makes friends with two outcasts, Ema and Spoon.  The three of them are an unlikely trio but together they start making progress on what really happened to Ashley.  I enjoyed the way the three of them settled in with each other and soon were making cracks and laughing.  Of course there are some dumb jocks at the school who try messing with them but I enjoyed every second of Ema and Mickey of standing up to them.

Once Mickey and his friends start looking for Ashley other mysteries pop up including one with the mysterious Bat Lady who lives in the house all the kids are afraid of.  Mickey sees her outside one day and when she calls him by name he totally freaks.  Later he and Ema go back to her house only to discover a creepy tombstone in the backyard.

Throw in a strip club, a 15 year old who drives his uncle's car illegally, and a few connections to the Holocaust and this story has a huge cast of characters and a multiple mysteries.  It was an action packed book that made me want to read more.  I liked the connection between Mickey, Spoon, and Ema, and eventually Rachel.  It seemed easy and real.  There were a few parts that I thought were far fetched, such as a high school sophomore getting in to a strip club with a fake ID saying he was 21, or a 15 year old stealing his uncle's car and driving it around town, but overall I found this to be a great book for young adults.