My brother and his girlfriend asked if they could stop by to visit and have dinner on their way back to Pittsburgh from Washington, DC.  I asked if they wanted to go out or if I should make something.  My brother said, "You can make us something."  I later heard from my mom that he loves stopping here for dinner because I let him browse my blogs and Pintrest board and pick what he wants for dinner. 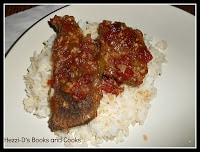 He chose short ribs with chipotle and green chili sauce.  I've had my eye on this recipe for a few weeks so I was happy to make it for them.  I was concerned about the spiciness of the short ribs because while I like a little bit of spice I don't like the "my mouth is on fire" spice that my brother enjoys.

This meal takes between 3 and 4 hours to prepare so it's a good one for Saturday or Sunday night dinner.  Most of the time is the ribs in the oven or on the stove top but there is some hands on work.  I was a little worried that the sauce wasn't thickening on the stove top but after an hour it was just about perfect.

The short ribs smelled spicy and smoky while they were cooking.  They were tender and juicy.  I could really taste the smokiness from the chipotles and while there was some spice from the green chilies, it wasn't overbearing.  I served them over top of rice to keep with my Mexican theme but I think they would be great over cheesy grits or creamy polenta as well.

1.  Mix first 5 ingredients in bowl and sprinkle over top of the short ribs. Place the ribs on plate.  Cover and chill at least 1 hour or up to 1 day. 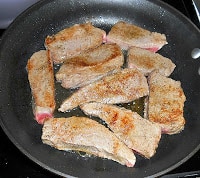 3.  Heat the oil in a Dutch oven over medium-high heat. Add half of ribs and brown on all sides, about 9 minutes.  Transfer to plate and repeat with remaining ribs.

4.  Reduce heat to medium and stir in the onion and garlic. Cook until onion is soft, stirring occasionally, about 5 minutes. Add broth and bring to boil, scraping up browned bits. Add tomatoes, lime juice, brown sugar, and chipotle chilies.

6.  Remove the pan from the oven. Spoon the fat off of the top and put the ribs back into the Dutch Oven.  Pour the liquid from the pan on top. 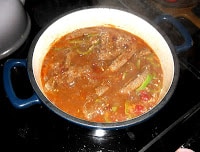 7.  Stir in the sliced Anaheim peppers. Place pot over medium heat and simmer uncovered until sauce coats spoon and ribs are very tender, about 1 hour. Season the sauce with salt and pepper.

8.  Serve over rice and sprinkle with cilantro or parsley. 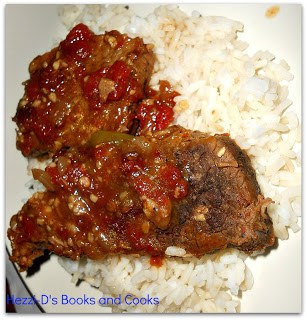