I do my grocery shopping on Sunday mornings.  I like to get there before 10am because it's usually quiet, there aren't many people there, and I can get my shopping done quickly.  I get mad when I get there after 10 because that's when the crazy people come out.  I'm not saying that they are always crazy, but they certainly have the "I don't want to be grocery shopping on a Sunday get out of my way" craziness.  They block the aisles with their carts and won't let you through, they stand with friends in front of popular products and give you the stink eye when you ask them to move, they ram their cart into yours whenever it's in their way.  Ah Sunday mornings. 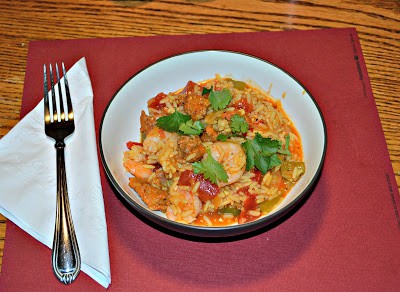 Thankfully I got to the market earlier enough this past Sunday that I didn't have to worry about that.  I had a nice, quiet shopping trip and all was well.  I picked up a few items that were on sale that I don't normally buy but that I knew Frank would enjoy.  Both shrimp and sausage were cheap and I was thinking a jambalaya might be in order.  The last time I made jambalaya it was in the crock-pot and while it was very good, I wanted to try it on the stovetop.  I like the flavors and spices in jambalaya and knew that it was perfect for this weeks #SundaySupper event, Spice It Up!

When I went to cook it I realized I had forgotten to take the chicken out as well.  I figured it was still going to be packed with flavor so I just made it without the chicken.  It tasted surprisingly good without the chicken and is a great one pot meal.  It was just spicy enough and had a wonderful flavor.  We both though that there were too many shrimp in the dish so next time I'll cut back on them, especially since I don't eat the shrimp (and the fact that I wasn't putting any on my plate MAY have been the reason why he ended up with so many on his plate). 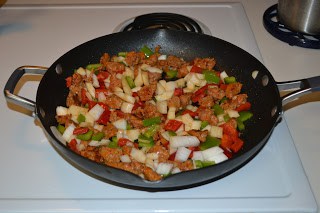 1.  Heat the olive oil in a large skillet over medium  high heat.  Add the sausage and cook for 5 minutes or until browned.

2.  Add in the onion, peppers, and garlic and cook, scraping the browned bits off the bottom, for 3-5 minutes or until the onion is softened.

3.  Stir the rice into the skillet and cook until the edges just begin to turn translucent.  Then stir in the tomatoes, clam juice, and chicken broth.  Bring to a simmer.  Cover and reduce heat to low.  Cook for 25 minutes.

4.  Remove the lid from the heat and add in the shrimp, black pepper, paprika, thyme, oregano, and cayenne pepper.  Cook for 2-3 minutes then cover with the lid and remove from heat.  Allow the jambalaya to sit, covered, for 5-7 minutes or until the shrimp are fully cooked.

5.  Serve hot and sprinkle with the fresh chopped parsley. 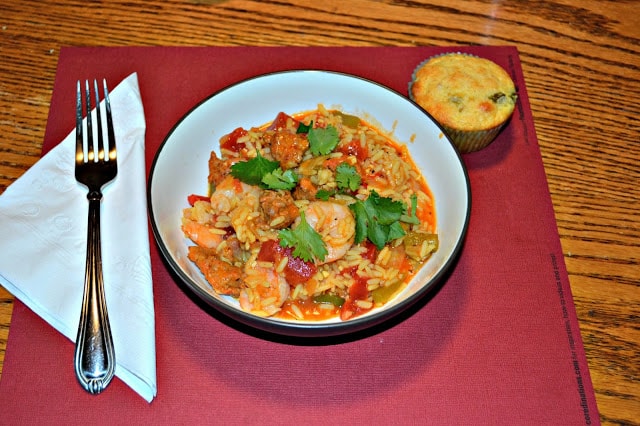