My dad makes the best hot tea.  When I was growing up any time I felt sick, had nightmares, or was having a bad dad my dad would make me a cup of hot tea.  As I got older we started calling it Daddy's Special Tea.  Even though I'm now in my 30's I still enjoy a cup of his Special Tea whenever I'm at home in Pittsburgh.  No one makes it quite like he does. 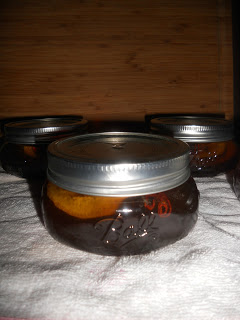 He makes the tea with lemon and honey so I'm always on the look out for different types of honey for him.  When I came across a recipe for Spiced Honey in Ball's Blue Book of Preserving I knew I wanted to make it for him as a gift.  The recipe was perfect as it was made from honey, lemon, and some spices.

The honey is canned with the lemon, cloves, and cinnamon in it so the longer it is sealed, the more flavor it has.  My dad loved his gift and has been using it in his tea.  I kept a few jars for myself and have been using it in my own hot tea.  It's a pretty present and it tastes good too. 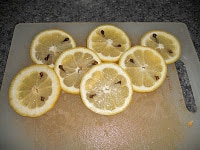 1.  Prepare 3 half pint jars in a boiling water canner.

2.   Place 2 cloves in each of 6 lemon slices.  Then put the honey, lemon slices, and broken cinnamon sticks in a medium saucepan over medium high heat.

3.  Bring the honey to a boil, stirring occasionally.  Boil for 2 minutes then remove from heat. 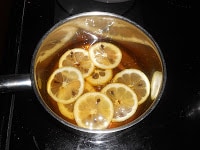 4.  Put two lemon slices and a few pieces of cinnamon stick into each jar.  Pour the hot honey into the jars, leaving ½ inch of headspace in each jar.

5.  Place the lids on the jars and tighten the screwbands to fingertip tight.  Place in a boiling water canner, place the lid on top, and boil for 10 minutes. 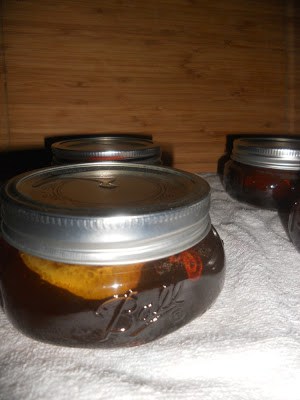