Free-spirited and more than a little rebellious, seventeen-year-old Jewel Cardwell isn't too thrilled when she gains admission to Grayton Preparatory School, a prestigious, girls-only, top-notch private institution nestled in the South African farmlands of Limpopo. Unfortunately, it's a move that will change her life forever.

Almost from the moment she arrives, a string of misfortunes and strange occurrences begin trailing her. The comforts of home have been swept away, and she is plunged into a world where she has to fend for herself. But that pales in comparison to what happens on the nights when there's a full moon. Dark forces swirl during those nights and turn up in the form of hideous monsters and frightening demons. Though Jewel has always been drawn to the darker side of life, this is more than she bargained for.

She's also caught between two boys: Darwin Morton, a lad she's known growing up, and Eric Broder, a soccer team leader with a silver spoon in his mouth. Why her love life has to get interesting now is a question she can't answer! The key to it all may be in her grandmother's locket, which Jewel always wears. Will Jewel be able to solve the mystery before evil is unleashed against those she loves?

Jewel lives in Africa and enjoys hanging out with her friends.  Riots are going on all around her but she doesn't think about any of that and continues on in her own life.  Everything changes when Jewel's parents tell her she's going to a Prep school far away from her home.  Before she leaves her grandmother tells her the family secret, the one that tells her something evil is coming for her. 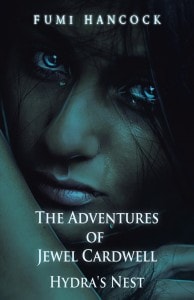 I found Jewel to be a strong character who had a lot of opinions but who could also be a total brat.  I also felt that she was angry for much of the book and we didn't really find out why.  There is a lot of action in the book and it is entertaining but I also found several inconsistencies throughout the book which was distracting for me.

About the Author:
Ah, yes.... A Grateful Heart for all the awesome people that's crossed my path, an Author of Inspirational Books and Fantasy & Paranormal Romance Young Adult Novels... an avid Book Lover who resides in Spring Hill, Tennessee! ​
Oh, I said it- absolutely crazy about these authors: Stephenie Meyer, Amanda Hocking, Samantha Young...and a Self Proclaimed Writer of the Year (Ok, perhaps a stretch but I'm on my way!).
​ Alright so I'm not in my twenties... probably starting my writing career just a tad-bit late... but I'm determined to be a success story too! I heard 40's s the next twenties in this century... If they are right, then I just peaked! Hooray for me. My friends range from ages 14 - You know... let your imagination run wide.... Ha!
Some call me an Humanitarian and a Life Changer for Children in Africa (http://www.adassafoundation.org).... Host of "From Scratch TV," an Online Inspirational TV Programming (http://www.fromscratchtv.com), Mother of  2 Terrific Sons and Daughters,  and an Adventure Seeking Adult with an unquenchable love for Young Adult Novels.
​To find out more, please visit http://www.worldoffumihancock.com
The Adventures of Jewel Cardwell Tour Page:
http://www.pumpupyourbook.com/2012/10/10/pump-up-your-book-presents-the-adventures-of-jewel-cardwell-hydras-nest-virtual-book-publicity-tour/