Atticus Wynn and Rosemary Sanchez, newly engaged private investigators, have seen the dark and violent side of life, but nothing has prepared them for an explosive murder investigation that threatens to tear their relationship apart. They struggle to solve a case that as a best result could leave them in prison or dead.

Atticus's manipulative ex-girlfriend bursts back into their lives wielding a secret about Rosemary's family. She exploits the fact to force the couple into investigating the execution-style slaying of her lover. The case thrusts Atticus and Rosemary headlong into the world of human trafficking and drug smuggling, while rendering them pawns in Tijuana Cartel captain Armando Villanueva's bloody bid to take over the Cartel. The Black Song Inside is a vivid crime thriller rife with murder and madness, melded with gallows humor and the heroism of two flawed and compelling protagonists. If they can save themselves, they may learn the nature of redemption and the ability to forgive. (-synopsis) 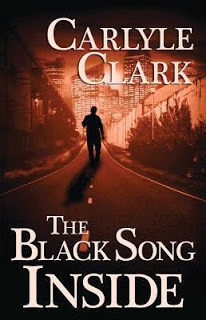 I thought that this was a fast paced an interesting book.  It opens with a woman being forced to watch a girl die without a way to help her.  She calls the police and tells them about it and they bring her into the station.

Atticus is brought to the station because the woman is his ex, Charlotte.  Atticus Wynn is a PI whose partner and fiance is Rosemary Sanchez.  The two are quite a pair and are good at their jobs.  Charlotte calls Atticus to the station in hopes that he will back up her story because she knows a secret about Rosemary.

Then there is the "Priest".  A man who has created his own religion and wants to begin finding acolytes.  He leaves murder in his wake and forms an alliance with a Mexican drug lord.

The story is a fast paced thrilled that revolves a lot around the drug war at the border which can be violent and crazy.   We see the inside world of the drug trade and wars between the traffickers.  I did find there to be a lot of characters in the story which made it confusing to follow in some parts.  There is also a lot of violence in the book.