Caught in a web of deceit, Caroline must run the race of her life to save her family home. Her reputation as the high society owner of the #1 stable for Ponygirls in the world is on the line. And, there’s only one man who can help her win.

Edward Hastings is steamy, passionate and dangerous. With molten brown eyes and a rock hard body, the notorious playboy could have any woman in the world, but he only wants her. The first time he’d seen Caroline dressed like a pony, he’d been enthralled. Now, nothing will keep him from her.

They strike a deal. He’ll train her if she sticks to his rules. But rules were made to be broken. The moment he slides the bit into her mouth, she knows she’s in trouble. As he ignites a fire in her body and her mind, will she make it through the week without losing her heart to him? Or will she be able to train temptation?

*Mature Adult novel - contains adult situations, an unusual fetish, high sexuality, some violence, and is suited for ages 18 and up*  (-synopsis from Goodreads) 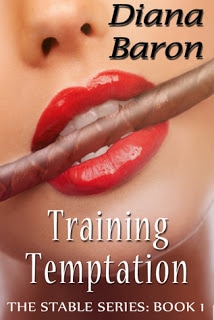 Before reading this book I had never heard of a ponygirl and did a little research on it.  It's pretty much a person that dresses up as a pony and takes on the traits of a pony either for show or for sexual role play.  Reading this book I did not get a clear picture of what the ponygirls were and was very confused by the entire thing through the first half of the novella.

Caroline is a former ponygirl who owns a stable and trains her own ponygirls.  The story opens with Caroline being behind in her mortgage payments and having a rival, Anton, trying to buy the estate and stables out from under her.  Caroline knows her fastest ponygirl can win the upcoming race along with enough prize money to keep the estate afloat.

Then her ponygirl gets injured and Caroline turns to Anton's son, the sexy Edward to help her.  He is another trainer who is supposed to be running his ponygirls against hers but in a crazy twist of events he agrees to train her for the race so she can keep her estate.  The training sessions quickly turn into hot and heavy sessions as things heat up.

While I liked the characters of Caroline and Edward there were so many pieces of the story missing I had a hard time following what was going on.  It started with my not understanding what the ponygirls were and it went downhill from there.  Edward and Caroline have 6 days to train together and end up training 1 time and somehow Caroline is in great enough shape to race.  There is no mention of her training at any other time.

Scenes skip from one day to the next but then a previous day is referenced in the next chapter.  I found the book to be confusing and the plot to be minimal.  While I enjoy a good romance novel, even ones with hot and heavy scenes, this one only had the hot and heavy and not much else.  The actual scenes themselves were pretty bland and I found myself disappointed.

I was provided an eBook copy of this book for my honest review.