I am incredibly proud of the trio of mini boozy cupcakes that I made for New Year's Eve.  Not only did they all taste amazing but they were so pretty to look at!  In the past I've made mojito cupcakes and really enjoyed them, so I went with those and then started looking for w other cocktail cupcakes that would work well together and be the perfect end to our party.  As soon as I saw the pina colada cupcakes I knew I had to make them.  They were gorgeous and I loved the idea of a spiced pineapple cake topped with cream cheese frosting.  The final cupcake in this trio was a Bailey's cupcake with Bailey's buttercream; the perfect accompaniment for coffee. 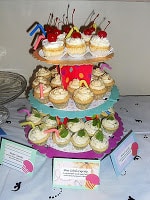 I loved making these cupcakes.  I made the actual mini cupcakes the night before and then decorated them the day of our party.  My favorite was the pina colada.   The pineapple rum cake was moist a flavorful.  The cream cheese frosting was fluffy and the coconut and cherry topping made it beautiful.  The mojito cupcakes had a moist spiced rum cake topped with a fresh mint and lime buttercream that was sweet and sour at the same time.  My Bailey's cupcake made for a wonderful end of the night coffee and Irish cream treat that paired well with a cup of coffee.  I can't wait to make these again for our next party!

2. In a large bowl combine the flour, baking powder, salt, and cinnamon.

3. In the bowl of an electric mixer cream together the butter and sugar until light and fluffy.

4. Add in the egg and egg white and mix until well combined. Mix in the vanilla.

5. Add in the flour slowly in 2 additions, pouring in the Bailey’s in between the flour. Mix until just combined.

6. Fill each cupcake liner ¾ of the way full. Bake for 15-17 minutes or until a toothpick inserted in the center comes out clean.

7. Put on a wire rack and cool completely.

8. In a medium bowl beat the butter with an electric mixer until light and fluffy. Add in the powdered sugar ½ cup at a time until completely blended. Add in the Bailey’s and coffee. If the mixture is not thick enough add more powdered sugar.

9. Decorate the cupcakes with the frosting and top with chopped chocolate.

1. Preheat the oven to 350 degrees. Line a mini muffin tin with 24 cupcake liners.

2. In a large bowl combine the flour, baking powder, baking soda, and salt. Set aside.

3. In the bowl of a stand mixer beat the butter and sugar until light and fluffy. Add in the egg and egg white and mix well.

4. On low speed add in the vanilla, sour cream, rum, and pineapple. Mix until just incorporated.

5. Add the flour mixture and blend until smooth.

7. Remove from oven and cool completely on a wire rack.

8. In a large bowl mix the butter and cream cheese with an electric mixer until well combined and fluffy.

9. Add in the vanilla and rum. Slowly mix in the powdered sugar a half cup at a time until the mixture is thick but fluffy. Refrigerate for at least an hour before frosting.

10. Frost the cupcakes with the cream cheese icing and immediately top with the coconut flakes. Refrigerate until ready to serve. Right before serving stick a cherry on top of the cupcakes.

2. In a large bowl combine the flour, baking powder, and salt.

3. In the bowl of a stand mixer cream the butter and sugar until light and fluffy. Slowly mix in the egg, vanilla, and rum.

5. Fill the cupcake liners ¾ of the way full. Bake for 15-17 minutes or until a toothpick inserted in the middle comes out clean.

6. Remove from the oven and completely cool on a wire rack. 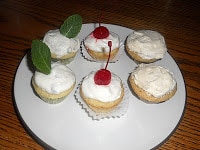 1.  In a mixing bowl beat the butter with an electric mixer until light and fluffy.  Add in the lime juice and fresh mint and mix well to combine.

2.  Add in the powdered sugar half a cup at a time until the frosting is firm.  Add in the spiced rum and mix well.

3.  Pipe the frosting on the mojito cupcakes.  Top with a lime slice and a whole mint leaf. 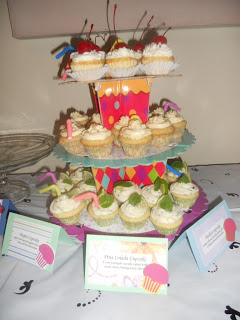