I love potatoes. They may be my favorite side dish. It doesn’t matter how they are cooked, I’ll eat them. One of my favorite ways to eat them is when they are twice baked. Surprisingly, I have never made a twice baked potato before. I recently found a recipe for them in my Taste of Home cookbook and decided to give them a try.

I baked the potatoes according to the directions but found that they were not cooked all the way so I had to put them back in the oven. Next time I think I’ll pop the potatoes in the microwave for 4 minutes and then put them in the oven to make sure they are fully cooked. I also had some difficulty scooping out the centers and leaving the potato skin shell. On one potato I tore the skin so I ended up wrapping the outside in foil which did wonders to help it hold its’ shape. The other potato I managed to scoop out without disturbing the skin. 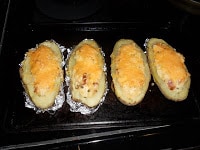 The inside of the potatoes was a snap to make. I cooked them for the second time and when I pulled them out they looked amazing. They were creamy with lots of bacon and cheese. The skins were crispy and salty. They were awesome. My husband loved them and wanted me to make them again the next night.
Twice Baked Potatoes (adapted from Taste of Home )
2 medium potatoes

2. Remove from oven and slice in half. Allow to cool for 10 minutes. Scoop out the pulp, leaving a thin potato skin shell. Place the pulp in a medium bowl and mash.

3. Mix the cream cheese, milk, butter, bacon, chives, and ¼ c. of the cheese in a bowl. Add the mashed potatoes and mix well. Sprinkle with salt and pepper.

4. Place the potato skin shells back on the baking sheet. Scoop the potato filling into each shell and top with the remaining ¼ c. cheese. 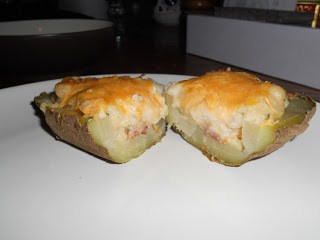