Violets and Violence by Morgan Parker

Violet has magical talent. She can levitate, walk through glass, and be in two places at one time. What happens when Violet discovers true magic in the arms of a new man?

Luke Kemble enjoys the luxury of having Violet, all of her magic and all of her beauty, all to himself. What happens to Luke's illusion of reality when he and the love of his life are threatened by another man, a dangerous one that holds grudges and anger?

Carter Borden never fully recovered from the heartbreak of his ex-wife leaving him. What happens to a damaged man who begins to believe in magic once again? 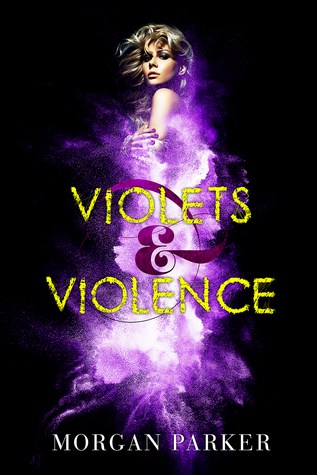 The book opens with Violet in a room with a lawyer.  She's accused of stealing papers from a safety deposit box.  In an effort to get them back the bank is willing to give her $200,000 and the papers can be returned anonymously.  She takes the money and begins her magical life.

The story follows three main characters.  First is Edie who is now called Violet.   She's a gorgeous woman who performs illusions in a magic show.   Her illusions are so good that she keeps on moving to bigger and better venues.   She's smart, she's pretty, and she knows what she wants.

Carter works at an investment firm.  His ex-wife left him for a much older, and richer, man.  He still goes by her house to see what she is up to.  His life is going nowhere fast until he finds himself at Violet's show.   He gets called up on stage and he's instantly smitten.  She gives him her number but he never calls.

A week later they have a chance meeting.  The two have dinner and there is definite chemistry between them.  Soon Carter can't stand his days without her but it's like there are two Violet's.  One is fun loving, happy, and loves to be with him.  The other is distant, tolerates him, and often drops off the grid for days at a time.   Can Carter find out who Violet really is and make her his girl?

Then there is Luke.   Luke is Violet's manager and live in boyfriend.   He takes care of raising funds for her show, booking gigs, and taking care of her.   He loves Violet and everything that comes with her...except for the distant days.  Most days Violet is the woman he loves and cares about but there are days when she stays out all night and keeps her distance.

When Luke flies back to New York he finds a surprise waiting for him.   An old colleague is there and he wants back the money Violet took from him.   The man locks Luke up in hopes Violet will come to save him and he will finally get his money back.

The story revolves mostly around Violet, her show, and her love.   But is she really the person both Carter and Luke need her to be?   Or is she really more of an illusion like the ones she creates on stage?

This is a great book for anyone who believes in the world of magic and likes a love story on the side.