Holiday season is the time for sharing and Peta of Peta Eats is sharing a dozen cookies, some classics and some of her own, from all over the world with us.  I was so excited to get this challenge because I've been ready to start my Christmas baking since October!  I quickly printed out several recipes I wanted to try and made two of them the very first weekend.  Those are the two I'm sharing with you today.  Throughout December I hope to be able to make several more of these fabulous recipes to share as well. 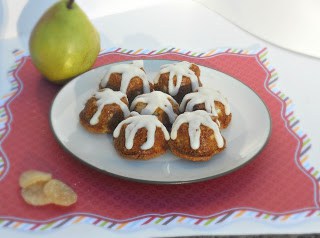 The first recipe I made was the pear and ginger bites.  They called for dried pears but I had fresh pears sitting in my fruit bowl so I opted to use those instead.  These little bites were bursting with flavor.  I loved the fresh pear and crystalized ginger combination that was paired with slivered almonds and the sweetness of sugar.  The lemon icing only added to this cookie and these cookies literally taste like Christmas. 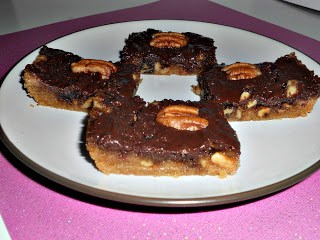 The second recipe I made were the turtle bars.  I am not a huge fan of pecans but I do love shortbread, chocolate, and caramel.  I found the cookie part to be slightly greasy but it seemed to work with the saltiness from the nuts, the buttery caramel, and the sweetness of the chocolate.  The ladies at work raved about these little jewels.

Pear and Ginger Bites (recipe adapted from Peta of Peta Eats)
½ c. fresh pear, dinced
1 T. crystalized ginger
½ t. baking soda
1 large egg
½ c. brown sugar, packed
½ c. sugar
½ c. butter
1  t. vanilla
½ c. slivered almonds
1½ c. flour
½ t. cinnamon
½  t. ginger
¼ t. nutmeg
¼ t.  baking powder
For the Icing:
1½ c. powdered sugar
3 T.  softened butter
2 T. lemon juice
1.  Preheat the oven to 350 degrees.
2.  Spray a mini muffin tin with cooking spray.
3.  In a large bowl cream the butter, egg, sugar, and brown sugar.  Add in the vanilla and stir.
4.  Mix in the pear, almonds, crystallized ginger, and baking soda into the mixture and stir well.
5.  In a medium mixing bowl combine the flour, cinnamon, nutmeg, ginger, and baking powder together.
6.  Stir the flour mixture into the sugar mixture.  Mix until just combined.
7.  Spoon the mixture into the mini muffin tins, filling ¾ of the way full.
8.  Bake for 20-25 minutes or until the tops are golden brown and a toothpick inserted into the middle comes out clean.
9.  Allow to cool and then remove from the pan.
10.  Combine all the icing ingredients together in a small bowl and mix until smooth.
11.  Drizzle over top of the pear bites and serve. 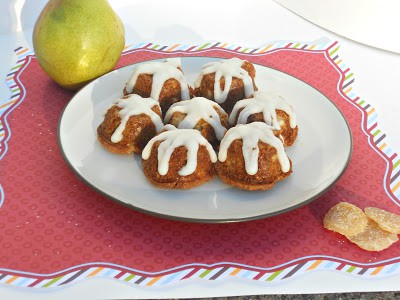 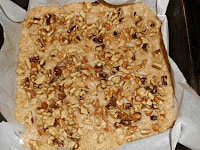 1.  Preheat the oven to 350 degrees.  Grease a 9 x 13 inch baking pan and set aside.
2.  In a large mixing bowl combine the flour, brown sugar, cinnamon, nutmeg, and ginger.  Pour melted butter over top and mix well.
3.  Press the mixture into the bottom of the greased pan.  Bake for 10 minutes. 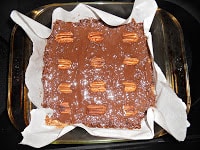 4.  Sprinkle the chopped pecans over top of the crust and continue baking for 5 minute.
5.  Meanwhile, melt the butter for the caramel in a small saucepan over medium heat.  Add in the brown sugar and stir until smooth.
6.  Heat the sugar and butter mixture until it is bubbling, stirring constantly.  Remove from heat and pour over top of the cookie crust.
7.  Bake for 10 minutes.  Remove from oven and sprinkle the chocolate chips over top of the caramel.  Let sit for 2 minutes then spread the melted chocolate evenly over the caramel layer.
8.  Place the halved pecans on top of the chocolate, making sure there will be 1 pecan on each piece when it is cut.
9.  Cool completely then cut into 15 bars. 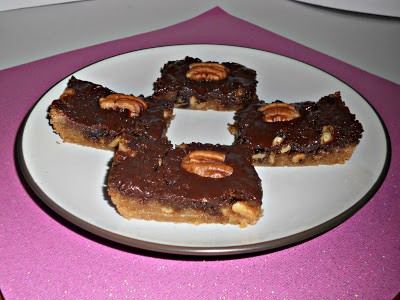