I really enjoy the Women’s Murder Club series that is written by James Patterson and Maxine Paetro. I have read four of them so far, in no particular order, and I’ve really enjoyed each one. So when I arrived at the library and found that my copy of 4th of July had arrived I was very excited. I couldn’t wait to get home and start reading it.
The book starts off with a bang. James Patterson wastes no time jumping into the story and within the first few chapters there is a car chase, a gun fight, one teenager dead, another severely injured, and two police officers shot at the scene. Then after getting out of the hospital, SFPD Lt. Lindsay Boxer is charged with a police brutality and wrongful death suite against her.

Lindsay runs to her sisters’ house to hide out on the advice of her lawyer, Yuki. But her vacation in Half Moon Bay is cut short when someone starts killing the local residents in a brutal way. The deaths are reminiscent of a ten year old cold case from Lt. Boxer’s past. She’ll never forget the death of John Doe #24 and these eerily similar deaths cause Lindsay to begin investigating the murders even though she is on restricted duty. 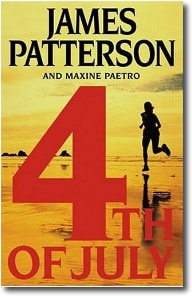 I really enjoyed this book. It was a page turner that I did not want to put down. Lindsay Boxer is at the center of this installment of the Women’s Murder Club series and she really shines in this book. The introduction of Yuki as the newest member of the club is the perfect balance. I can’t wait to get the next book in the series and the newest one that just came out.