When a Social Studies teacher assigns a special project to six high school students, (Richard, Shelly, Nathan, Charles, Morgan and Britt) they receive a lesson that may indeed change lives of many worlds. As they work on the problems set before them they come to realize that the typical real world issues that each student had been dealing with doesn’t look all that bad. As the unlikely group of misfits explores the project, they discover strengths that they were completely unaware they had. 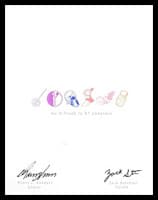 For seven whole days they stay in a mysterious book unlocking puzzles, fighting demon-possessed statues, creating bonds with a memorable cast of characters and fighting a villain who controls the powers of the heavens. Mr. Hutchenson, a professor of social studies at St. Cardinals, is a man who plays a large part within this story, but just as the kids have to discover that, so does the reader. These six kids work on finding that strength by not only fighting the enemy, but the enemy within.

Buy Now @ Lulu
Genre – Young Adult / Fantasy
Rating – PG13
Connect with Robin L Sanders on Facebook & Twitter
The book starts out by introducing a huge cast of characters and talks about each characters family.  Then we see how the characters interact with other students at school.  One day six of the students get into trouble and are only allowed to stay in school if they complete a project together.  The project involves a huge book.

When the students begin to read the book they are sucked into the story.  Soon the 6 teenagers are solving puzzles and just trying to get home again.  They learn about themselves and each other on their journey.

I had a hard time reading this book.  The beginning was confusing for me and it introduced characters that weren't important to the story.  I also had difficulty with the grammar in this book.  In some places I think the author was writing the way he did because of the character that was speaking.  Other times I think there were just a lot of grammatical errors.

This book dragged on for me and I had a difficult time finishing it.  There were details in the story that I either didn't care about or didn't make any sense.  For example, in one part 3 of the students visit each others homes.  One chapter later two of the students see each other and the boy tells the girl he didn't know she lived around there.  Really?  You just visited her house 5 hours ago.  Inconsistencies like this were part of my issue with this book.