I’m still working on the six pounds of apples that I bought at the Fruit Bowl this past week. The applesauce was scrumptious, but now I was in the mood for something more substantial. I’m a teacher so I normally work 8-3:30 everyday, but today is parent-teacher conference day so my schedule is 11-7. This worked out well for me because it gave me some time to come up with a breakfast recipe that included apples.

When I think breakfast and apples I immediately think muffins. They are easy to make and really good in the mornings or for a snack. I decided to make a simple apple cinnamon muffin with sour cream to make it moister. I chopped one apple and grated another to give the muffins a few chunks but to also add apple flavor to the muffins. 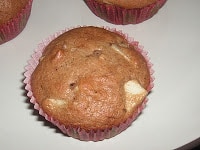 The muffins turned out well. They were not too sweet (which is perfect for breakfast), and they had a great apple flavor to them. After making them I realized I had some dried cranberries in the cupboard. I think adding a half a cup of cranberries to the muffins would have made a nice harvest muffin for fall. I’m thinking I might make another batch using the cranberries.

1. Preheat the oven to 350 degrees. Line a standard muffin tin with paper liners.

2. In a medium bowl combine the flour, cinnamon, nutmeg, baking soda, and salt.

3. In a large bowl cream the butter, sour cream, and sugars. Add the applesauce and vanilla and stir until it’s well combined. Mix in the egg.

4. Stir the dry ingredients into the wet ingredients a little at a time until well combined. Stir in the apples and nuts.

5. Divide the batter into 12 muffin cups. Bake for 22-25 minutes or until a toothpick comes out clean. 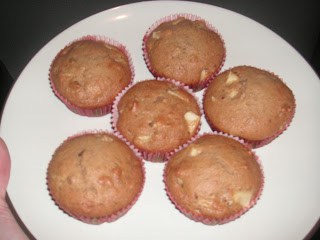