There is nothing better on a chilly fall night then a warm bowl of apple crisp. Since I happen to have around 4 ½ pounds of apples left I figured I’d make this treat for my husband and I.

I have tried many versions of apple crisp over the years. Some of them have been dry, others have had a topping that wasn’t the greatest, and some have been pretty yummy. I hoped that having made so many different versions of the crisp that I could use what I’ve learned and make the best apple crisp yet.

I cut, peeled, and sliced the apples. Then I placed one Granny Smith apple on the bottom and layer one Gala apple on top of it.

I then put on a layer of sugar, cinnamon, and lemon juice. I thought this might help to make the apple crisp moist and more flavorful. Then I layered the other two apples on top. I finished off with a very simple crumb topping. 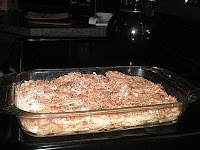 The result was amazing! The apples had softened and combined with the spices and lemon juice to make a moist apple bottom on top of which was a buttery crisp topping. It tasted and smelled like fall.

My husband asked if we could just eat apple crisp for dinner. Of course I agreed! The only thing that could have made it better would have been a scoop of vanilla bean ice cream.

Apple Crisp (by me!) 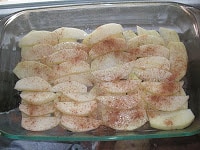 4. In a small bowl combine the brown sugar, flour, and oats. Blend the butter with a pastry blender or 2 forks until it is crumbly. Sprinkle on top of the apples to cover the entire top. Bake 20-25 minutes or until the top begins to brown. 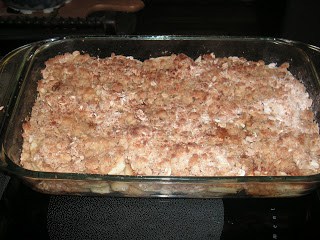