The What's Baking? challenge for March was hosted by Amanda, from Our Italian Kitchen. The theme she has chosen is Bake From Your Nationality/Heritage, in honor of St. Patrick's Day!  I am Welsh on my mother's side and Slovak on my father's side so I immediately began searching for recipes.  When I was younger my paternal grandmother and her sisters used to cook a lot of Slovak and Polish food so I grew up having Halusky, Paska, Stuffed Cabbage, etc., but we never really had any of the Slovak baked goods. 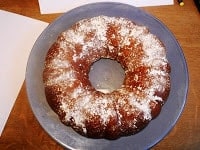 I went to the Slovak Republic website and looked up recipes for Slovak baked goods.  I found two that sounded amazing.  One was like a crepe, which I've made before, so I decided to go with the Babovka.  Babovka is Slovak Pound Cake, generally made in two layers, vanilla and chocolate.  It sounded yummy and the ingredients were ones I already had in my kitchen. 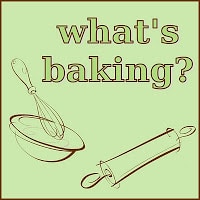 I loved how beautiful it looked when it came out of the oven. It was golden brown on the outside but the inside was a swirl of vanilla and chocolate.  So pretty.  I topped it off the traditional way with powdered sugar. It is also suggested that the more modern way is to top it with nuts, raisins, or poured chocolate. 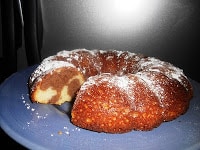 I need to say that this cake is not sweet the way American cakes are sweet.  It has a slight sweetness to it.  It also isn't as heavy as American pound cake.  I liked it, it was good, but it's hard to describe the actual taste because it's unlike anything I've ever had.

2.  Separate the eggs putting the egg yolks into a large bowl and the egg whites into a small bowl. 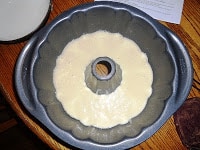 3.  Mix the sugar with the egg yolks.  Slowly add in the oil, applesauce, and hot water.  Mix well.  Slowly mix in the flour and baking powder until smooth.

4.  With a hand mixer beat the egg whites until they triple in size.  Fold the egg whites into the batter with a spatula until just blended.  Mix in vanilla. 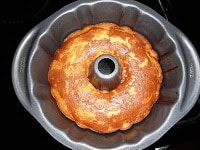 5.  Pour half the batter into a bundt pan.  Add the cocoa powder into the remaining batter and stir well.  Slowly pour chocolate batter over top of the vanilla batter.

6.  Bake for 45 minutes or until a toothpick comes out clean.  Let cool for 15 minutes then flip onto a pretty plate.  Dust with powdered sugar and serve.

**This recipe made a fairly small bundt cake portion.  If you want a large cake that fills up the bundt pan, double this recipe.** 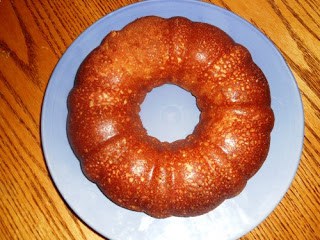 This post linked to:
It's a Keeper﻿ Thursday, Frugal Food Thursday
Friday Potluck, Fat Camp Friday
Sweets for a Saturday